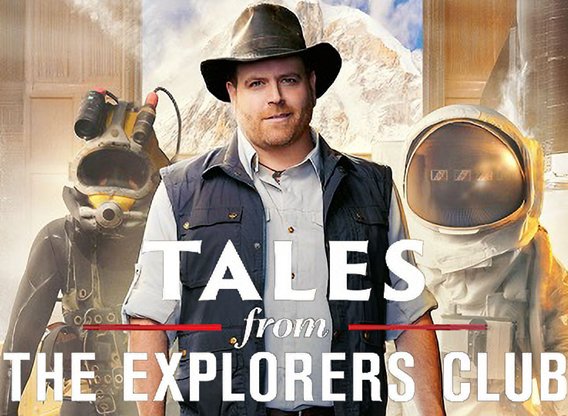 Where: Discovery Channel and discovery+

In the all-new series hosted by adventurer Josh Gates, TALES FROM THE EXPLORERS CLUB will take viewers inside the headquarters of the world-famous Explorers Club to relive the epic journeys of adventurers who have pushed the boundaries of human possibility. As a member of this prestigious organization and the host of Discovery's hit travel-adventure series "Expedition Unknown," Gates offers exclusive access to the Club's storied archives, expert staff, incredible artifacts, and even fellow members and explorers. The series will profile the accomplishments of real-life action heroes including Ernest Shackleton, Gertrude Bell, Sir Edmund Hillary, Jim Lovell, and Chuck Yeager among others.

Each uniquely themed episode will focus on historic Explorers Club members whose daring accomplishments changed the world - from Edmund Hillary and Tenzing Norgay's historic first summit of Mt. Everest to a father and son's dangerous mission to explore the world's deepest oceanic trench, Challenger Deep. Viewers will witness the unforgettable journeys of those who dared to push boundaries by being the first to reach the North and South poles, risking their lives to explore outer space, and so much more. Additionally, each episode will highlight one trailblazing recipient of The Explorers Club Discovery Expedition Grant and showcase the innovative projects that continue to expand our knowledge of the world around us. Viewers can join the conversation on social media by using #TalesFromTheExplorersClub and following Discovery on Facebook, Instagram, and TikTok.

Grantees featured throughout TALES FROM THE EXPLORERS CLUB:

· Dr. Nina Lanza is testing new aerial drones and hi-tech bio-sensing equipment on Earth to further help in the exploration of Mars.

· Geophysicist Jamin Greenbaum is studying the Thwaites Glacier in Antarctica, a mass of ice the size of Florida, to determine what is accelerating the melting process.

· Former astronaut Ed Lu is mapping asteroids in our solar system to help predict and prevent any impending impact with Earth.

· Connor Wood, Ph. D. is navigating California's Sierra Nevada Mountains via snowboard to research and record the mating calls of an endangered species that spends 30 weeks of every year buried under snow: the Yosemite Toad.

· Dr. Seheno Andriantsaralaza is researching a species of tree in Madagascar that is shrouded in myth. She's trying to determine how animals disperse the seeds of the Baobab tree, often called "the upside-down tree" due to its peculiar shape, to help perpetuate the species.

· Evan Kovacs is a deep sea explorer leading unprecedented interior studies of the HMHS Britannic shipwreck, the larger sister ship to the more famous Titanic. In 1916, the Britannic sank off of Greece in the Aegean Sea and Kovacs is looking to solve the mystery of the ship's demise.

"Tales from the Explorers Club" premieres on Wednesday, August 31 at 9PM ET/PT; new episodes will air every following Wednesday at 8PM ET/PT

Tales from the Explorers Club will take viewers inside the headquarters of the legendary Explorers Club to relive the epic adventures of members who have pushed the bounds of human possibility venturing to Earth's highest peaks, deepest ocean trenches, the North and South poles, and even into outer space. With exclusive access to the Club's storied archives, expert staff and brave members, the series will profile the accomplishments of real-life action heroes including Ernest Shackleton, Gertrude Bell, Sir Edmund Hillary, Jim Lovell, and Jeff Bezos among others.