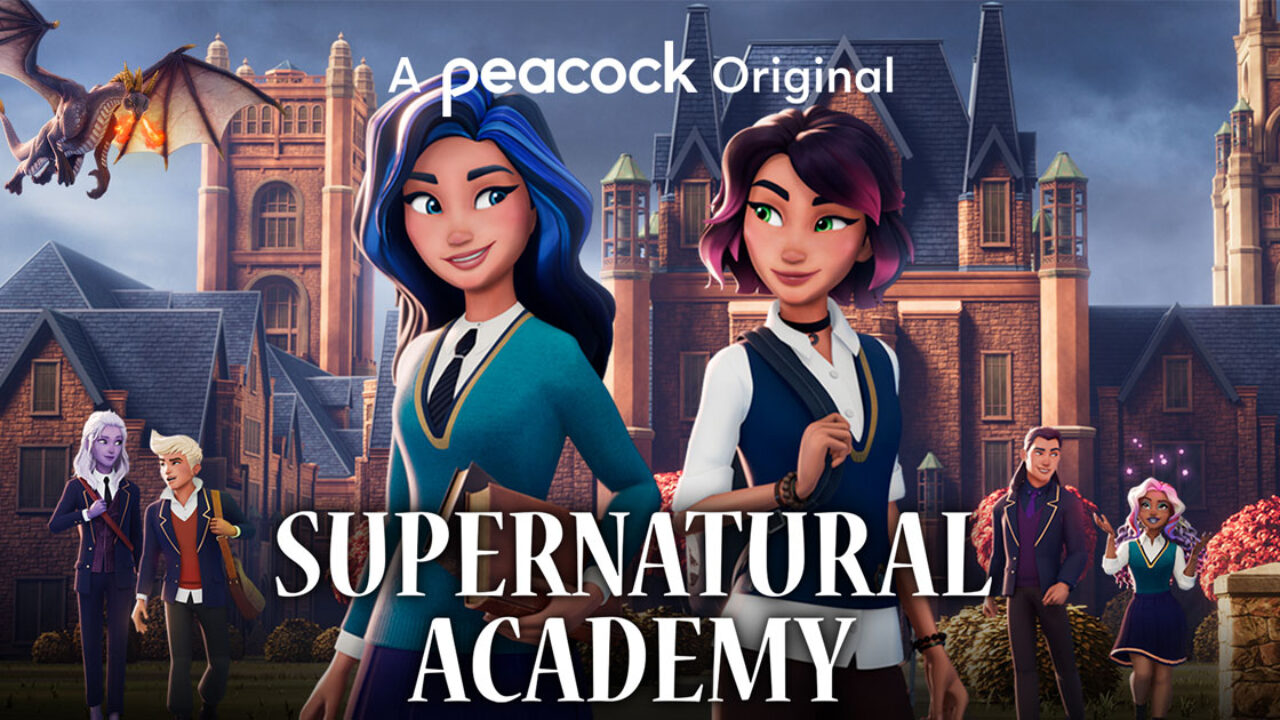 · Peacock has announced it is expanding its animated programming with a full season order of the all-new original YA fantasy series SUPERNATURAL ACADEMY, produced by 41 Entertainment.

· The series is the book adaptation of best-selling series "The Supernatural Academy" from Jaymin Eve, chronicling an otherworldly adventure of sisters marked at birth. One twin sister was raised in the Supernatural world, confident and popular. The other was raised in the human world, an offbeat outsider. Now they're about to be reunited at the Supernatural Academy, and neither one of them is thrilled about it. These adversarial twins will have to learn to get over their differences and trust each other in order to save themselves - and save the world!

· "It is so incredible to see my original story come to life in this high-quality animation project," said Jaymin Eve, author of best-selling series 'The Supernatural Academy.' "I am so grateful to both Peacock and 41 Entertainment for believing in me and I am sure that all of the fans of the books are anxiously marking January 20th on their diaries."

· Developed and Written for Television by: Gillian Horvath

· Produced By: 41 Entertainment (Kong- King of the Apes, Tarzan and Jane, Super Monsters)

LARISSA DIAS (Supernatural, Falling Skies, Hallmark's When Calls the Heart) as "Jessa Lebron." Jessa is a popular Wolf Shifter in her junior year at the Supernatural Academy. She has everything a girl could ever ask for including a supportive father and four best friends with their own unique supernatural skills.

GIGI SAUL GUERRO (Marvel Super Hero Adventures, Into the Dark: CULTURE SHOCK, Super Monsters, Nina's World) as "Mischa Jackson/Lebron." Raised by a single mom with a tendency to move from place to place, Mischa has never fit in anywhere. The timid, creative and sweet natured girl transforms after realizing her mother has hidden who she truly is for sixteen years.

VINCENT TONG (Ninjago, Ice Age: Adventures of Buck Wild, The Dragon Prince) as "Maximus." Max is a natural leader as proven through his watchful eye on his younger brother Braxton.

CARDI WONG (Are you Afraid of the Dark?, Supergirl) as "Braxton." Brax is the lovable, goofy and smooth talker of the group.

SHANNON CHAN-KENT (You, Woke, Good Trouble, Life Sentence) as "Elda Kristov." Elda is the daughter of the Headmaster of the Supernatural Academy and sees Jessa as her main rival for Queen Bee status.

BRIAN DRUMMOND (Mega Man: Fully Charged, The Willoughbys) as "Headmaster Kristov." Kristov proves himself to be manipulative, villainy, and self-righteous as he plots against the Lebron twins from the moment they are reunited.

BARBARA KOTTMEIER (Supernatural, Motive, Falling for Vermont) as "Lienda Jackson/Lebron." Lienda is the true definition of a Mother. She is a strong woman who has sacrificed her supernatural ability and a life with one of her twin daughters, solely to protect her family.

ALESSANDRO JULIANI (Battlestar Galactica, The Magicians, Girlfriend's Guide to Divorce, The 100) as "Jonathon Lebron." As head of the World Council and the Alpha Wolf of the Lebron pack, Jonathon not only has a civic duty but a paternal instinct to save the realms and his daughters.

DIANA KAARINA (The Hollow, Barbie, My Little Pony, Strawberry Shortcake) as "Santra." As the new history teacher at Supernatural Academy, Santra is the intelligent, compassionate, and confident guide that students can rely on.

KATHLEEN BARR (Sabrina: Secrets of a Teenage Witch, My Little Pony: Friendship is Magic, Johnny Test) as "Yufon." Yufon is a powerful and stern member of the World Council.