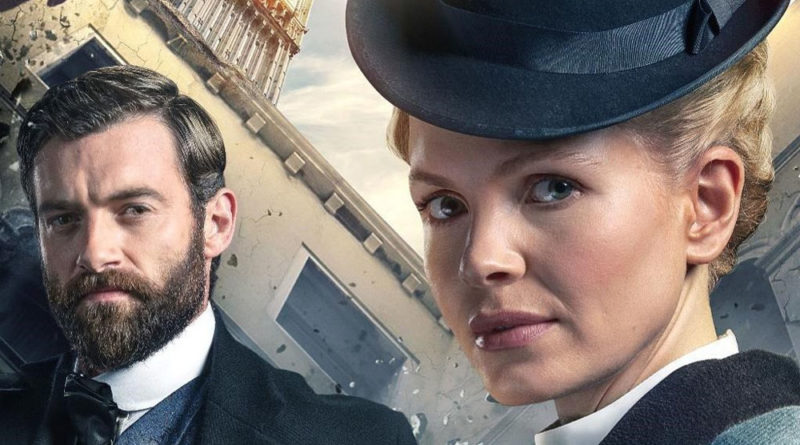 Miss Scarlet and The Duke: Season 2 and Season 3 Airdates and More

There's double the good news for fans of the Victorian detective series Miss Scarlet and the Duke!

While we're waiting for two new seasons, we'll catch you up on the basics of what the show is about, the cast, how you can stream Season 1 and more.

About the Show and What's Ahead

Season 1 is set in London at the start of the Sherlock Holmes era, circa 1880. Eliza's father, Henry, is a widowed retired police officer, currently a private detective running up bills and drinking through his occasional earnings. Nonetheless, he's a talented investigator, and has taught his only child, Eliza, the trade since she was a girl. She is now determined to break into this male-only profession.

Fortunately, Eliza's childhood friend happens to be a detective inspector at Scotland Yard: William "The Duke" Wellington. He gets his nickname from the most famous Englishman of the 19th century: the Duke of Wellington, victor over Napoleon at the Battle of Waterloo. Like that other Wellington, the Duke is cool and decisive in a scrape. And he's also a ladies' man, which leads to interesting complications with Eliza.

Sometimes working together - but often at odds - Eliza and the Duke tackle a series of fascinating cases. On launching her business, Eliza's initial challenge is not criminals or clients so much as getting society to take a female detective seriously, even one who has mastered wounds, poisons, motives, and red herrings.

Season 2 opens a few months after the conclusion of Season 1: Eliza has solved a very personal case that vexed her throughout Season 1; her relationship with William ("the Duke") continues to slowly simmer; and she continues to face the challenges of being a female private detective in male-dominated Victorian London.

The Cast and Characters

Just starting out with Miss Scarlet and The Duke? Here are some of the unforgettable characters you'll meet in Season 1, along with brief bios of the actors who portray them.

Kate Phillips (Miss Scarlet): Miss Scarlet may appear to be a refined Victorian lady, but she's also as scrappy and feisty, resilient and strong-spirited.

Before her days solving crime and irking the Duke as Eliza Scarlet, Phillips made a name for herself in series such as Peaky Blinders (as Linda Shelby) and The Crown (as Venetia Scott). MASTERPIECE fans may remember Phillips as Jane Seymour in Wolf Hall and as Tillie Seigler in My Mother and Other Strangers.

Stuart Martin (The Duke): William "The Duke" Wellington is a tough Scotland Yard inspector who lives and breathes his work - and believes that only a man can do the work of a detective properly. But his old friend Eliza Scarlet is determined to prove him wrong

Martin is known for his work on television series including his three-season run on Jamestown as Silas Sharrow, on Medici as Lorenzo, and in the limited series Babylon. Martin's talents don't just stop at traditional on-screen roles. The actor has leant his vocal talents to a number of popular video games, including Assassin's Creed, Dreamfall Chapters, and Ryse: Son of Rome.

Cathy Belton (Ivy, the Scarlet family's housekeeper): Ivy does what she can to be part housekeeper, part parent to Eliza after the death of her father, but impulsive Eliza isn't exactly the best at listening to her advice.

Prior to her days on Miss Scarlet & The Duke, Belton was best known for her work in the award-winning film Philomena, alongside Judi Dench, and for starring roles in series such as Red Rock and The Woman in White.

Andrew Gower (Rupert Parker): Parker seems to be a mild-mannered oddball from a wealthy family. But underneath it all, he's an independent think and strikes up a unique friendship with Miss Scarlet.

MASTERPIECE fans may recognize Gower from his appearance in the fifth and final season of Poldark as James Hadfield, whose attempt to assassinate King George III was foiled by none other than Ross Poldark himself. Gower also made a name for himself in the second season of Outlander as the "Bonnie Prince" Charles Stuart.

Ansu Kabia (Moses): Fans may recognize Kabia from his roles in films such as Murder on the Orient Express and Last Christmas, or from TV roles in series such as I May Destroy You and Casualty. Miss Scarlet and The Duke, however, is not Kabia's first MASTERPIECE role - the actor also appeared in World on Fire and The Long Song.

Kevin Doyle (Henry Scarlet): Henry Scarlet, a retired police officer, is the original Scarlet detective in the family. Before his untimely death, Mr. Scarlet ran his business into some trouble, leaving Eliza to pick up the pieces after his death. But it turns out Miss Scarlet may not be so alone after all, as Henry's memory guides her through the shady London underworld in Season 1.

Doyle is recognized for his six seasons as Mr. Molesley in the Downton Abbey television series, and the subsequent films. On top of his Downton days, Doyle has also appeared in a number of series including Happy Valley, The Tudors, and Silent Witness.

Where to Catch Up on Season 1

Before Season 2, there is still time to immerse yourself into the intriguing, funny, and romantic world of Miss Scarlet and The Duke. You can watch all episodes of Season 1 right now with PBS Passport, an added member benefit. PBS Passport offers you a wide selection of episodes, including many fan favorites from MASTERPIECE.

Investigate More About Miss Scarlet and The Duke

Want to make sure you know everything about Miss Scarlet and The Duke Seasons 2 and 3? Sign up for the MASTERPIECE email newsletter for the latest show news and updates. You'll be joining a community of more than 1.5 million MASTERPIECE fans.

It's official: Season 2 will premiere on Sunday, October 16 at 8/7c. Eliza Scarlet and William 'The Duke' Wellington are back on the case in an action-packed, all-new season.

MASTERPIECE and Element 8 Entertainment have announced a second season of Miss Scarlet and The Duke, the popular mystery starring Kate Phillips as the fearless, first-ever female detective in Victorian London and Stuart Martin as her childhood friend and potential love interest Inspector William “The Duke” Wellington.

Almost eight million viewers tuned in to the series’ first season, which premiered on PBS in January as part of MASTERPIECE ‘s 50th anniversary lineup. It was streamed 3.6 million times.

“Miss Scarlet and The Duke was an instant fan favorite,” says Susanne Simpson, executive producer of MASTERPIECE. “Our audience couldn’t resist its lighthearted tone and the appealing characters so wonderfully portrayed by Kate Phillips and Stuart Martin. We’re delighted the show will return for a second season.”