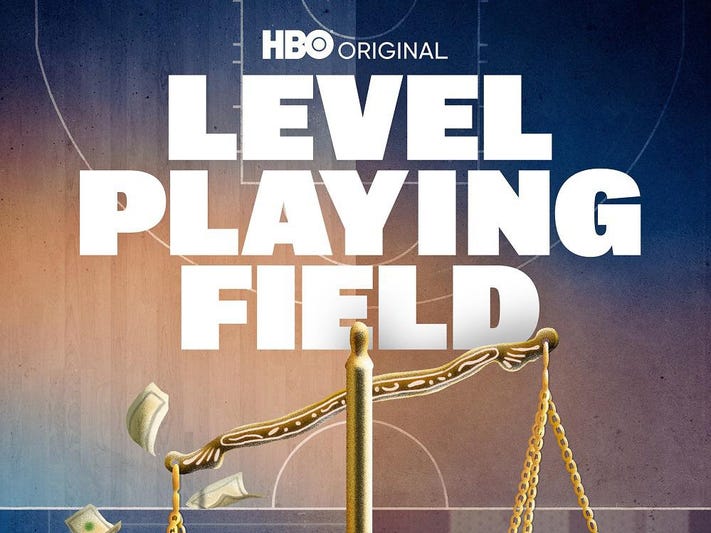 HBO Sports and Vox Media Studios have teamed up on LEVEL PLAYING FIELD, a sports documentary series featuring a range of stories that illuminate how public policies have contributed to inequities in the sports landscape and society at large. The four-part documentary series debuts TUESDAY, SEPTEMBER 14 (8:00 - 8:30 p.m. ET/PT), with half hour episodes airing subsequent Tuesdays at the same time. LEVEL PLAYING FIELD will be available on HBO and to stream on HBO Max.

LEVEL PLAYING FIELD examines how multi-billion-dollar industries in and out of sports have historically underpaid their most valuable assets, politicized community-based initiatives, and stifled the voices of athletes of color. Featuring stories and insights from sports and policy changemakers including the WNBA's Elizabeth Williams, U.S. senators Cory Booker and Raphael Warnock, Rep. Joaquin Castro, and sports journalist Jemele Hill among others, the dynamic four-part series looks at the far-reaching twin impacts of legislation and activism as they intersect with sports.

Episode 1 investigates the intersection of sports, race, and social policy through a look at "Midnight Basketball" - the innovative program started in Glenarden, Maryland in 1986 to provide a haven for at-risk youths and help curb rising crime rates in the area. The successful endeavor was embraced by both President George H. W. Bush in his "1,000 Points of Light" initiative and President Bill Clinton in the 1994 Crime bill, yet still became the focus of partisan debate riddled with racial stereotypes - stereotypes that still linger to this day.

Episode 2 focuses on the events that precipitated the NCAA's creation of the term "student-athlete," connecting that history to a wider modern trend in corporate America: avoiding legally classifying workers as "employees" to escape the fiscal responsibilities that come along with that designation.

Episode 3: "Down the Backstretch"

Episode 3 explores how the shift in United States immigration policy towards Central America during the Trump administration impacted the horse racing industry. With laborers from Latin America making up a predominant number of backstretch workers at racetracks across the country, the "sport of kings" - typically associated with big money trainers and owners - suddenly found itself with a shortage of some of its most overlooked and undervalued figures.

Episode 4 explores the intersection of sports and politics through an examination of the WNBA's Atlanta Dream's landmark role in the election of Senator Raphael Warnock and the ongoing fight against voter suppression in Georgia. The Dream players' impassionate campaign against then-Georgia senator - and team owner - Kelly Loeffler made an undeniable imprint on one of the most closely watched senate races of all time.