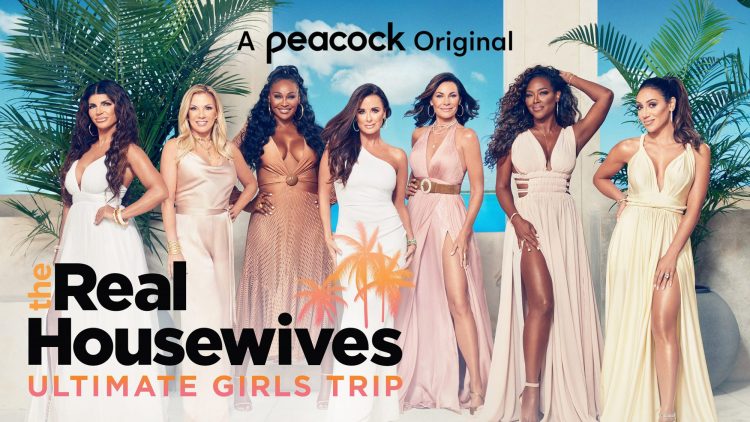 Fans can also binge the first season of "The Real Housewives Ultimate Girls Trip" on Peacock.

COMING UP THIS SEASON:

Since her days on "The Real Housewives of Beverly Hills," Brandi Glanville has spent her time concentrating on being a mom, looking for love and hosting her podcast. Brandi is excited for a fresh start, but her off-the-cuff comments and party girl behavior quickly gets in the way.

Always the host with the most, Dorinda Medley is determined to "make it nice" for the ladies and plans a jam-packed week in the lush countryside of The Berkshires. The itinerary is set and the guest rooms are prepared, but will the ladies be ready for all of the activities she has planned for them?

Eva Marcille is all about good energy and excited at the prospect of making new connections and bonding over shared experiences of being Housewives. However, with such strong personalities, Eva quickly finds herself working as a peacemaker amongst the group.

Not one to turn down an adventure, Jill Zarin's bags are packed, and she is ready to go on vacation with this group of women. Although she knows some better than others, in typical Jill fashion, she is ready to make herself and her thoughts known to everyone.

With a successful law practice, career as a mortician and two young boys at home, Phaedra Parks is ready for a break from her everyday life. When conversations get heated and the group reaches a breaking point, Phaedra uses her calm demeanor and spirituality to try to knit the group back together. Will she succeed?

Always the life of the party, Tamra Judge is excited to let loose, make new friends and create more memories with her gal pal, Vicki. With a tendency to make her opinions known to everyone, she wastes no time confronting Brandi about their social media battle a few years back.

Since leaving "The Real Housewives of Beverly Hills," Taylor Armstrong has relocated to Orange County and currently lives with her daughter and husband, whom she rarely leaves. She has found her voice and is not afraid to use it, especially with her former co-star Brandi, who she has a score to settle with.

Vicki Gunvalson is thrilled to "whoop it up," but quickly finds herself heartbroken when her engagement is called off one day before the trip. With Vicki not feeling her best, she is confronted by the ladies for alienating herself.

· The wait is finally over! Peacock has unveiled an all-new trailer and show art for the Peacock original series, THE REAL HOUSEWIVES ULTIMATE GIRLS TRIP, which will begin streaming on Thursday, November 18. Three of the eight episodes will drop on premiere day, and a new episode will be available each Thursday following.

· For the first time in "Real Housewives" history, iconic franchise members from coast-to-coast will unite on a luxurious getaway filled with unexpected friendships, fun in the sun and plenty of drama. The Peacock original series will take viewers on the trip of a lifetime when the ladies jet off to Turks and Caicos for an epic vacation packed with private jets, glamorous yachts, scenic excursions, a full-time concierge, a visit to the infamous Conch Shack and a TikTok shared around the world. From self-shot confessionals to bonding over what it's like to be part of the pop culture zeitgeist, just when you thought you'd seen it all, think again! Oh, and Housewife super fans will rejoice: Kyle hosts a dinner party, complete with a psychic at the helm.