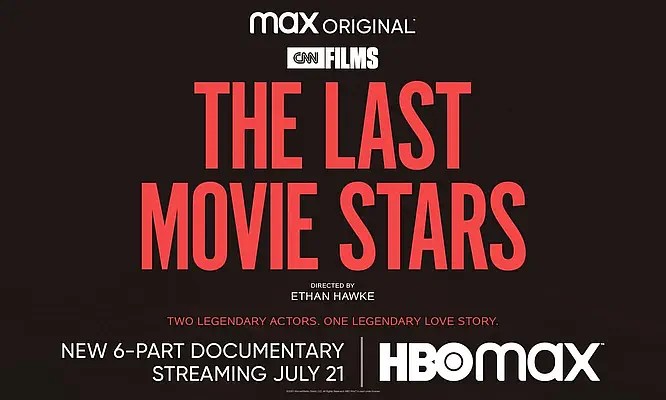 HBO Max To Debut All Six-Parts Of Documentary THE LAST MOVIE STARS, From Ethan Hawke, Depicting The Extraordinary Lives Of Paul Newman And Joanne Woodward, On July 21

HBO Max will debut all six-parts of the Max Original documentary from CNN Films, THE LAST MOVIE STARS, on THURSDAY, JULY 21, which celebrates the enigmatic personas, incredible talent, and love story of actors Joanne Woodward and Paul Newman. Four-time Academy Award nominee Ethan Hawke, who previously directed the highly-acclaimed documentary, "Seymour: An Introduction," directs the six-part documentary. Academy Award-winning director, writer and producer Martin Scorsese serves as executive producer. THE LAST MOVIE STARS premiered at SXSW followed by Cannes in May, where it screened in the Cannes Classics section.

Central to THE LAST MOVIE STARS is a long-abandoned project that Newman commissioned from friend and screenwriter Stewart Stern. At Newman's request, Stern interviewed close friends, family, and artistic collaborators Elia Kazan, Sidney Lumet, Karl Malden, Sidney Pollack, Gore Vidal, Jacqueline Witte, Joanne Woodward, and others for a planned memoir. Newman was also interviewed by Stern. They discussed his youth, his first marriage with Witte, his romance and life with Woodward, his personal demons, and the gut-wrenching loss of his son, Scott.

In addition to archival interviews with Woodward and Newman, Hawke enlisted actors Karen Allen, George Clooney, Oscar Isaac, LaTanya Richardson Jackson, Zoe Kazan, Laura Linney, Sam Rockwell, and others to voice segments of the original transcribed interviews for THE LAST MOVIE STARS. Hawke also interviewed some of Newman's daughters for insights into their parents and Hawke's contemporary interviews with Sally Field and Martin Scorsese explore what made Woodward's and Newman's singular careers, and relationship, so inspiring. The result, delivered in six parts, is a thoughtful, revealing documentary of lives well and fully lived.

"It's an honor to get to share Joanne and Paul's inspiring life and love story with audiences this summer. I'm especially thrilled that a project we've poured so much heart and soul into now has its home at HBO Max, a platform known for celebrating and championing the documentary artform," said THE LAST MOVIE STARS director Ethan Hawke.

Woodward and Newman are enduring symbols of smoldering cool. Their joint and individual credits include "Cool Hand Luke," "Hud," "The Three Faces of Eve," "Winning," "Butch Cassidy and the Sundance Kid," "The Hustler," "The Glass Menagerie," "Rachel, Rachel," and more. Though their intense romantic relationship was a perennial obsession of fans and Hollywood press, they successfully refocused their fame towards their art, racing, social justice, and human rights, and balanced demanding careers with a fulfilling marriage. During the course of their lives together, they also raised hundreds of millions of dollars for causes they believed in, and were active in civil rights and the environment, inspiring legions of other artists to follow in their footsteps.

In addition to Scorsese, Amy Entelis, executive vice president for talent and content development for CNN Worldwide, and Courtney Sexton, senior vice president for CNN Films, are also executive producers; Mario Andretti is a co-producer for THE LAST MOVIE STARS. The documentary is produced by Emily Wachtel and Lisa Long Adler of Nook House Productions, Ryan Hawke of Under the Influence Productions, and Adam Gibbs. Hamilton Leithauser is the composer for the original score.