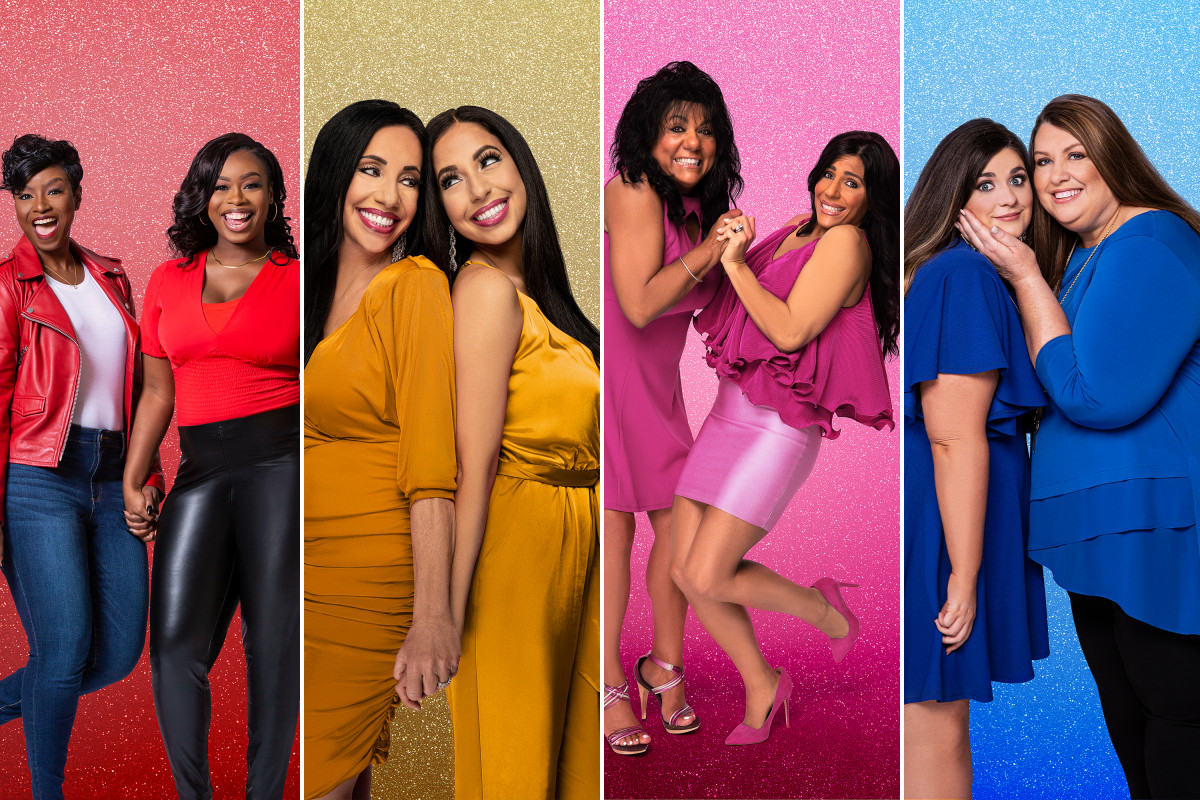 Has sMothered Season 4 been cancelled or renewed? When does sMothered return in 2022/2023? sMothered? We have the very latest sMothered cancel/renewal status and sMothered premiere date:

(Los Angeles, Calif.) - Just when you thought you had seen it all, SMOTHERED returns to TLC on Monday, August 8 at 9PM ET/PT with more to love. This season welcomes back four fan-favorite mother-daughter duos and introduces three new pairings. From bathwater to bedrooms to boyfriends, these twosomes have shared everything and with beautiful babies being welcomed into the mix, a new legacy ensues - grand-smothering!

Meet the new and returning cast of SMOTHERED:

Paula & Francia (new) believe there's no such thing as boundaries. They dance, party, and sleep nude together - even indulging in the occasional tickle fight. For this pairing, mother-daughter roles are reversed. While Francia's youthful spirit makes her act like a kid, Paula shoulders the responsibility of making sure that her mother is properly fed and always has a packed lunch. An only child, Paula's possessiveness over her mother reaches new extremes when she learns that Francia is planning to adopt her niece from Colombia, which leads Paula to put an elaborate plan into motion to derail her journey and keep her at home under her thumb.

Shay & Angie (new) have always been attached at the hip, and they've grown even closer since daughter Shay came out as transgender. Angie is determined to be there for every step of Shay's journey to womanhood. However, her mother's support starts to feel a little too overbearing for Shay's liking when Angie starts sticking her nose in her daughter's personal life and decides to take the lead on Shay's weight loss journey. Shay begins to feel more like her mother's pet project than her daughter.

Ashley & Cathy (new) hold each other's hand through everything. When this look-alike mother-daughter pairing gets bored, head-turning behavior is sure to follow. From chin lifts to nipple piercings to tattoos, no activity is off-limits for Cathy and Ashley. Their legendary boudoir photo shoots have captured the attention of plenty of potential partners on dating apps, sometimes catching the eye of the same man on more than one occasion. When Ashley moves in next door, the duo spends more time together than ever - much to the dismay of Ashley's sister, Samantha, who shares a home with their mother. Ashley deliberately excludes Samantha, causing her sister to grow bitterly jealous.

Cher & Dawn (returning) dress alike, talk alike, act alike - they can even tell what the other is thinking! After being separated for six years while Jared finished his residency in New York, Dawn is ecstatic that Cher is finally moving back home to Florida. The only problem is that Jared's new job is taking them to Miami, which is closer to his family. Dawn is determined to persuade the family to move back to Tampa for good.

Cristina & Kathy (returning) are always up in each other's business - especially now that Cristina has moved from five to four houses down the street from her mother. With Carlo's pizzeria finally on its feet, Kathy looks forward to having Cristina all to herself again. But when Carlo announces that he is dead set on expanding his business, a jealous Kathy worries that the new venture will start to eat up her daughter's time again. Employing some old-school mom-guilt, Kathy pushes Cristina into a heated confrontation with her husband, who insists that her mother keep her nose out of his affairs.

Angelica & Sunhe (returning) are closer-than-close - sharing everything from their bank account to their bathwater. Crushed by Jason's hesitation to tie the knot and her mother's disapproval of the match, Angelica has called off her wedding. Sunhe dreams of raising Angelica's newborn baby, Amara, by her daughter's side. However, her plans are frustrated by the fact that the family is still living under Jason's roof, while Angelica remains determined to make their relationship work, Jason insists that Sunhe hit the road. Tensions come to a head when Sunhe issues him an impossible ultimatum: if she goes, she's taking Angelica and Amara with her.

SMOTHERED is produced by Bodega Pictures in association with the New York Post Entertainment for TLC.

· SMOTHERED (Renewed for Season 4) - Sharing bath water was just the tip of the iceberg for these moms and daughters. In its most recent third season, sMothered ranked #2 in its time period among women 25-54. With 25M Facebook video views, audiences continue to watch overbearing mothers play a major role in their daughters' lives, ranking among the top 10 most social cable reality shows on premiere night across each social platform.

TLC'S HIT SERIES "SMOTHERED" RETURNS WITH AN ALL NEW SEASON AND A NEW NIGHT, BEGINNING MONDAY, MAY 31 at 9PM ET/PT

(Los Angeles, CA) - Everyone's favorite sMothered pairings are returning along with some brand new mother/daughter duos that will leave jaws on the floor. If you thought you'd seen it all last season, wait until you meet our new pairs who share underwear and exchange Brazilian waxes. These outrageous moments add to the shocking relationships that we couldn't peel our eyes away from past seasons. While following the lives of these six devoted and extreme duos, viewers will have a front row seat to their unique rituals and unbreakable bonds. sMothered returns on a brand new night and premieres Monday, May 31 at 9PM ET/PT.

Meet the new and returning duos:

Amy & Carina (new) the Hawaii mother/daughter pair are truly inseparable - panty swapping, joint showers, sleeping in the same bed... you name it! They believe they are connected on a spiritual level and knew each other in a past life. Neighbors describe their house as a circus with their 11 animals including two great danes and eight ducks. Even though they love their lifestyle, Amy is starting to realize that she and her daughter may share an unhealthy attachment that prevents them both from having functional romantic relationships. She grapples with the guilt but will she be able to bring herself to break away from it?

Karla & Rykia (new) are Alabama mother and daughter besties whose "closeness" includes exchanging Brazilian waxes! They share everything together and are always on the same page. Karla loves to meddle in all her kids' lives and while Rykia seems to love it, her brother Rasheed feels the complete opposite. He is so turned off by their need to over share inappropriate information that he has put off introducing his girlfriend of 9 months. As new developments happen in Karla's life and her childrens, she tries to hold on to her bestie and keep everything the same.

Lisa & Lauren (new) are two southern belles who act more like sisters than mother and daughter. There's no such thing as boundaries with these two. They facetime while they take baths, wax each other's mustaches and Lauren constantly sleeps over at her mother's house, despite the fact that it causes friction with her wife, Laura Leigh. Lauren and her wife have been trying to conceive a child for two years and are taking a break to save some money. At least that's what her wife thinks! Lisa and Lauren have other plans to make sure Lauren is able to have the family of her dreams.

Sunhe & Angelica (returning) share a vault-like tightness that somehow Angelica's fiancé Jason has been able to crack...sort of. When Angelica and Jason announce their engagement and pregnancy to their families, things go downhill fast. Not only do Angelica and Jason have Sunhe's options to consider, but now Jason's mom is in the picture and she isn't going back home anytime soon! What is supposed to be the happiest time for a couple leaves Angelica wondering if she wants to marry Jason at all.

Kathy & Cristina (returning) the loud Italian duo from Chicago are living apart again after Carlo quit his job at his family's pizzeria and cancelled Cristina's plan for a home renovation. Once the pandemic hit, Carlo decided he wanted to open his own pizzeria, and Cristina became a business owner overnight. With the stress of the new business, Cristina pulls away from Kathy, who is desperately clinging to their old traditions. But Kathy won't give up, and finds ways to insert herself back into her daughter's life, whether Carlo wants her there or not!

Dawn & Cher (returning) the two dynamic brunettes known for their coordinating outfits and loud personalities are reunited in Florida after spending months apart due to the pandemic. Not wanting to be without Cher and her granddaughter Belle for that long ever again, Dawn hatches a plan to convince Jared to let Cher and Belle stay in Florida with her. Dawn is never one to be scared by boundaries, but has she gone too far this time?

sMothered is produced by Bodega Pictures in association with the New York Post Entertainment for TLC.

"At TLC, we love showcasing heartwarming families and extreme relationships like viewers have never seen, and our mother/daughter duos in sMothered are unbelievably dynamic," said Howard Lee, President and General Manager of TLC. "We can't wait to introduce these inseparable, obsessed, loving pairs to our loyal TLC fans as they share some of the most challenging and exciting moments in their lives."

These women are a constant presence in each other's lives, but that's just the tip of the iceberg. They do everything together - from dressing in matching outfits, to getting plastic surgery and injections, to sharing the same bath water and even sleeping in the same bed!

Every mother/daughter pair prioritizes their unique relationship above all else, often causing rifts between their siblings and significant others. But, the ladies' lives begin to change as they experience various life events, like boyfriends, pregnancy and moving out on their own, and maintaining the same level of closeness may prove impossible. Faced with the reality that their tighter-than-tight relationships could be pulled apart at the seams, these women are determined to find a way to remain attached at the hip.

sMOTHERED offers viewers a chance to relish in third-wheel envy as they get to know, and grow to love, these vivacious twosomes, and explore their uncanny, but undeniable, bonds.

Dawn and Cher are more like twins than mother and daughter. They look, speak and act alike, and they both married Jewish doctors in their early twenties! Their relationship is put to the ultimate test when Cher admits that she has been keeping a huge secret from her mom, forcing Dawn to reevaluate her place in her daughter's life.

Not only do Sunhe and Angelica sleep in the same bed, but they often share the same bath water! Sunhe has never lived without her daughter, and her life is sent into a tailspin when Angelica wants to take things with her boyfriend to the next level.

Kathy is a constant presence in Cristina's life and often acts as a co-parent to her grandchildren; however, Cristina's husband and in-laws feel that Kathy is overstepping her boundaries, thus igniting a family feud.

Sandra and Mariah are BFFs who do everything together, including partying and double dating. Mariah's desire for her mother to have more fun in life causes Sandra to push the limits of traditional mom behavior.

sMothered is produced by Bodega Pictures in association with the New York Post Entertainment for TLC.