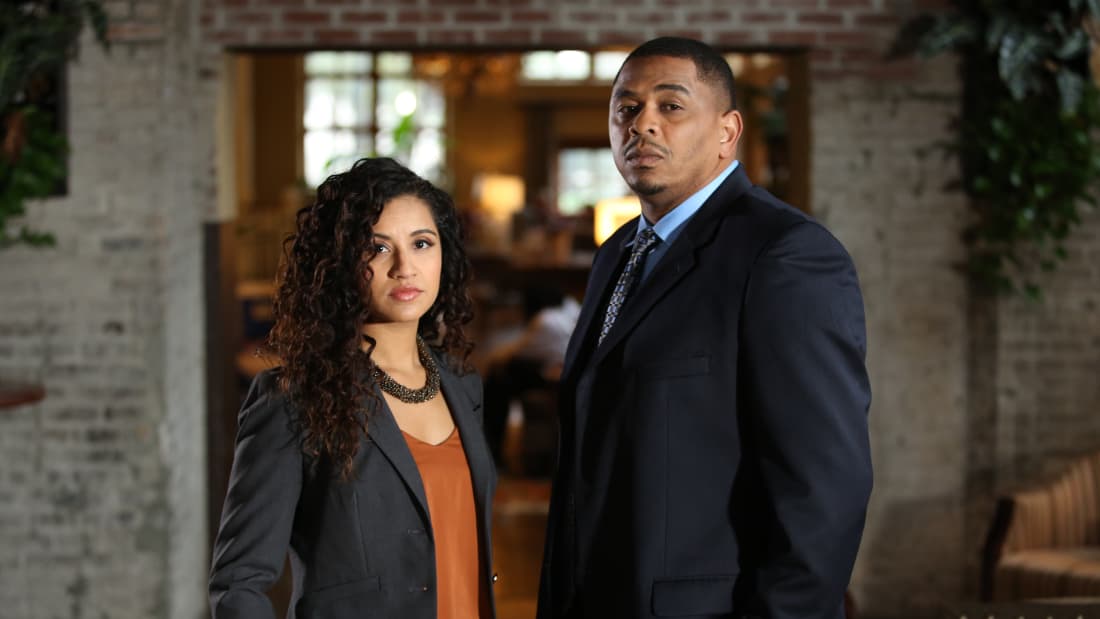 (New York, NY) - With anguished pleas from prisoners proclaiming their innocence, families across the country are tormented with an excruciating question: is their convicted loved one truly guilty or are they innocent serving unjust time behind bars? On a mission to uncover the truth behind these potential judicial missteps, retired homicide detective Chris Anderson and criminal defense attorney Fatima Silva team up once again with open minds and objective lenses to piece together the puzzling facts. The two pore through evidence, interview key witnesses and consult previously overlooked experts to reveal the unbiased truth and ensure the right person is behind bars for the crime committed. Each episode culminates in an emotional reckoning with reality as Chris and Fatima either provide the families hope for an appeal, or the crushing reality that their loved one is rightfully convicted of murder. A gut-wrenching new season of REASONABLE DOUBT returns to Investigation Discovery with 10 all-new cases beginning Tuesday, August 9 at 10/9c on ID. The fifth season will be available to stream in its entirety on discovery+ beginning October 12 along with previous seasons.

In the season five premiere of REASONABLE DOUBT, respected California probation officer Rodney Patrick McNeal gets a life sentence for murdering his pregnant wife in a fit of rage. With limited physical evidence, the conviction has never sat well with his family who are convinced McNeal was wrongfully convicted. In a desperate, last-ditch appeal, McNeal's daughter and sister have asked Chris and Fatima to take a second look at the case to see whether McNeal is an innocent man doing time for someone else or whether he is right where he belongs. The premiere episode, "Guiltless or Heartless," premieres on August 9 at 10/9c on ID.

Additional investigations this season include: the case of Laverne Fields, a woman convicted by a jury for murdering her husband as he lay in bed, despite her children insisting that he had died by suicide ("Prison Moms" premieres August 16); Joel Atkin, a 2009 fateful wrong turn that led to a petty argument and spur of self-defense that leaves one man dead and Atkin behind bars ("Bringing Guns to a Fist Fight" premieres August 30); Russell Holbrook, convicted of murdering Melissa Howard after a 10-year investigation and fighting to reclaim his innocence ("Murder Without Motive" premieres September 6); Garrett Arrowood, convicted of killing his aunt during a robbery gone wrong despite the family insisting that two con men were involved ("Aunts and Artifacts" premieres September 13); and more.

REASONABLE DOUBT is produced for Investigation Discovery by Painless Productions and RPR Media.

Retired homicide detective Chris Anderson and defense attorney Fatima Silva re-examine controversial murder cases to ensure that the right person is behind bars for the crime committed. The due process-duo return to look at 10 new cases with an objective lens, hopeful to uncover the truth behind questionable courtroom convictions. Their investigation culminates in an emotional reckoning with families, either offering hope for an appeal, or acceptance of their loved ones' guilty verdict.

THE DUE-PROCESS-DUO RETURN TO INVESTIGATION DISCOVERY FOR SEASON FOUR OF "REASONABLE DOUBT"
(New York, NY) - All too often, innocent people fall through the cracks of the justice system. These judicial missteps leave families devastated with doubt and paralyzed by unanswered questions about their convicted loved one. Determined to uncover the truth of these questionable convictions, retired homicide detective Chris Anderson and criminal defense attorney Fatima Silva return for a fourth season of REASONABLE DOUBT. With 10 all-new cases, Anderson and Silva use their resources, collective expertise, and objective investigative lens to re-examine controversial murder cases throughout the country to ensure that the right person is behind bars for the crime committed. After their thorough investigation, Anderson and Silva review the evidence with the family to either present the chance for an appeal, or confront them with the crushing truth that their loved one may have been rightfully convicted of murder. Appeal or acceptance? Either way, this due-process-duo finds the truth, with their revelations pushing families toward an emotional reckoning with reality. Season four of REASONABLE DOUBT returns to Investigation Discovery with 10 gripping new episodes airing Mondays at 10/9c beginning July 12. The complete fourth season will join the previous three seasons of the series and will be available for streaming on discovery+ beginning September 21.

"As a former homicide detective, finding justice for victims and their families is what drove me my entire career," said co-host Chris Anderson. "The work we do on REASONABLE DOUBT is so important because it provides a completely independent look at cases to offer objective truth to ensure the right person is behind bars."

"Everyone deserves the opportunity to defend themselves against criminal allegations," said co-host Fatima Silva. "Arrests, court proceedings, convictions - all of these things can erroneously destroy an innocent person's life and livelihood. With REASONABLE DOUBT, the accused finally have a chance to be heard and Lady Justice's scales can be rebalanced."

In the season four premiere of REASONABLE DOUBT Anderson and Silva are confronted with one of the most confounding murder cases of the series. When Justin Lunsford and Liz Herma crossed paths, they had a wild, but seemingly typical, night out for the pair of twenty-somethings. Lunsford claims the two went their separate ways the next morning, but the next day, Herma was found dead in her home, with her home and vehicle both set on fire. Lunsford was arrested for Herma's murder after a witness places "a man" at the crime scene. Lunsford claims he felt pressured by the court to plead guilty to a 23-year sentence to avoid the death penalty, but maintains his innocence. In the premiere episode of REASONABLE DOUBT airing on Monday, July 12 at 10/9c, Lunsford's brother and wife are relying on Anderson and Fatima's independent investigation to find the hope that could put their broken family back together.

Additional investigations this season include: the case of Kara Garvin, a drug dealer convicted with a life sentence after her alleged co-conspirator turned her in for a triple homicide; David Thorne, whose family claims Thorne, with an air-tight alibi, was not responsible for masterminding his ex-wife's murder; Glynn Simmons, who was convicted of a 1974 armed burglary from an eyewitness testimony, but insists he was in another state at the time; Steven Cheban who was convicted of killing his mother-in-law, and whose wife is desperate to know if she should continue to stand by her husband, or finally give up the fight; and more.

(Silver Spring, Md.)—Investigation Discovery, the #1 true crime network, proudly announces that the hit series REASONABLE DOUBT, which explores controversial murder convictions through an objective lens, has been greenlit for a fourth season. With their parallel expertise of the law, hosts retired homicide detective Chris Anderson and criminal defense attorney Fatima Silva know that the justice system doesn’t always get it right. As cries of innocence reverberate through prison cells across the country, this series sets out to help families who are desperate for someone to listen to their evidence and theories, convinced that their loved ones were wrongfully convicted of murder. Each episode is an intense and thorough re-examination of a murder case, where the two pore over evidence, interview witnesses, and consult experts previously overlooked by police or barred by the courts to hopefully reveal the truth. Each episode culminates with the gut-wrenching reveal to the family that either brings hope for an appeal, or clarity to accept the guilty verdict. Season 4 of REASONABLE DOUBT is set to premiere in early 2021 on ID.

“The work that Chris and Fatima do on REASONABLE DOUBT is beyond admirable, and perhaps even, a necessary additive as we evaluate the checks and balances needed on our own justice system,” said Henry Schleiff, Group President, Investigation Discovery, Travel Channel, American Heroes Channel and Destination America. “The incredibly compelling aspect of their work is that they are solely driven by a desire for truth to reveal if the right person is indeed behind bars, serving as advocates for those who refuse to let their convicted loved ones be forgotten by society.”