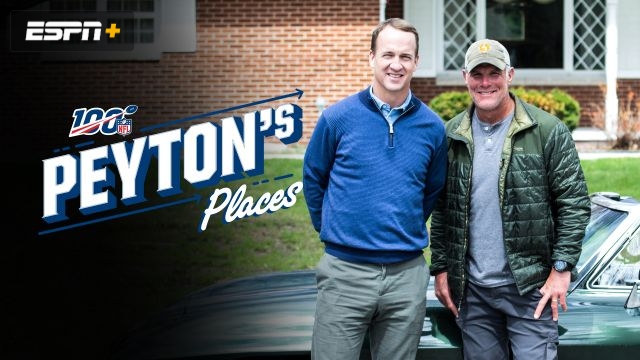 At the Walt Disney Company Upfront presentation today, Peyton Manning announced the second expansion of the popular Places Universe on ESPN+ through 2024.

"The Places franchise is all about giving fans an inside look at their favorite sport so we are excited to be adding such incredible teammates as the Places Universe continues to expand," said Peyton. "Sue, P.K. and John will all bring a unique and colorful perspective to their sport's history as they give viewers a look at some of their favorite places."

Peyton Manning will return with the highly-anticipated season two of Peyton's Places on ESPN+ on Thanksgiving weekend - with the 15-episode second season of the Emmy-nominated ESPN+ Original series debuting on Sunday, November 29.

Peyton's Places offers fans of all ages a fun, insightful celebration of football. Through conversations with players, entertainers and icons, Manning travels the country to get to the heart of football history and its cultural impact. As only Peyton can, he brings fans closer to the personalities, memorable moments and unknown stories that have played an important part in making the NFL what it is today.

"Peyton's Places is a history project that became a passion project," said Peyton. "There's so many fascinating things about football history that people just don't know and I'm looking forward to bringing it to ESPN+."

Connor Schell, Executive Vice President, Content, ESPN added, "Peyton's Places season two continues a fantastic, one-of-a-kind tour through football, with the greatest guide a fan could hope for. The new season on ESPN+ picks up where the first season left off, bringing fans and families closer to the stories of football - and the league that captures the imagination of tens of millions of fans every week."

Peyton's Places is produced by NFL Films in collaboration with ESPN+. In addition to hosting, Peyton serves as an executive producer for the series and has been closely involved in choosing the people, places and stories in the series. Episodes 1-5 in season two include:

· MARSHAWN LYNCH: Peyton visits with Marshawn Lynch, one of the most feared running backs in NFL history. Known for his scripted answers, Lynch opens up to Peyton and discusses joyriding on an injury cart, causing an earthquake and his pre-game superstitions. Debuts November 29.

· JOHN ELWAY: One of the NFL's greatest quarterbacks and Peyton's former boss, Elway meets up with Manning at Mile High Stadium in Denver where they break down film of The Drive. Debuts December 6.

· LYNN SWANN: Peyton talks to the legendary Steelers receiver about the unique skill and ability to play football in the air, and reunites Swann with the AMC Pacer X, the same kind of car he won as the MVP of Super Bowl X. Debuts December 13.

· FRAN TARKENTON: The mobile quarterback of the modern NFL owes some of its DNA to Tarkenton, who broke free from the mold of pocket QB. Debuts December 20.

· TERRELL OWENS: Owens is one of the biggest and most widely misunderstood personalities in NFL history. Peyton meets with T.O. to talk about his Hall of Fame career and larger-than-life persona. Debuts December 27.

ESPN NFL Insider Adam Schefter will host Peyton's Places: Season Two Preview Special on November 24 at 7 p.m. on ESPN2. The show will feature guest appearances from Peyton, Swann and a special appearance by Archie and Olivia Manning. The show will give fans a sneak peek inside the new season through unique segments and first-look excerpts - while also looking back to hand out "The Peyties" - tongue-in-cheek awards from the first season.