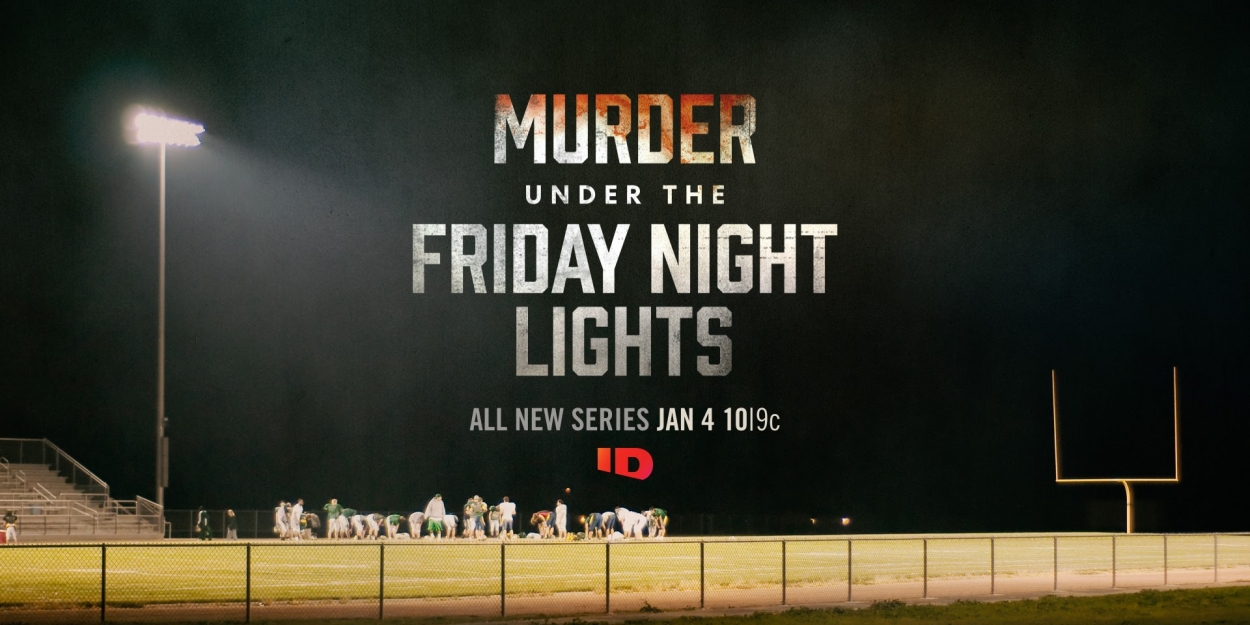 (New York, N.Y.) - This November, ID's hit series, MURDER UNDER THE FRIDAY NIGHT LIGHTS, returns with more dark and deadly cases of crimes tied around America's sacred pastime of spending evenings under the bright glow of stadium lighting. Building off of its gripping freshman season, new episodes take an unflinching look at the shocking and tragic cases of deception, obsession and murder surrounding towns across the country where football bonds communities together. Season Two of MURDER UNDER THE FRIDAY NIGHT LIGHTS continues to explore the question: What happens when football is the lifeblood of a community ... and real blood is spilled? The sophomore season kicks off Wednesday, November 16 at 10pm/9c only on ID.

"MURDER UNDER THE FRIDAY NIGHT LIGHTS was the number one highest-rated freshman series for ID over the past two years and made an incredible initial impression with our audience," said Jason Sarlanis, President of Crime and Investigative Content, Linear and Streaming. "With this new season, we will continue to give our viewers an inside look at cases dealing with small-town high school football programs, and we've also expanded the series to recognize this American pastime affects the country as a whole regardless if its high school, collegiate or professional teams."

Featured cases this season range from a beloved local high school coach's secret life that led to his grisly murder to the devastating death of Denver Bronco star Darrent Williams and the diabolical case of a serial predator who was a rising star during Joe Paterno and Penn State football's most defining season, among others. The new season will showcase not only how these teams turned entire teams and athletic programs upside down -but also how they tore entire communities apart.

MURDER UNDER THE FRIDAY NIGHT LIGHTS is produced by Lion Television US for Investigation Discovery.

Across the country, high school football unites small-town communities. But when a heinous murder shatters that Friday night dream world, the crime ripples beyond those immediately impacted, and the community will never be the same again.

--Season Finale of MURDER UNDER THE FRIDAY NIGHT LIGHTS will Air Tuesday February, 8 at 10/9c --

(New York, NY) - ID announced today that it would be renewing the hit new series MURDER UNDER THE FRIDAY NIGHT LIGHTS for a sophomore season ahead of its first season finale. The riveting freshman series offers a fascinating and stirring look at just what happens when the local high school football team is the lifeblood of a community... and real blood is spilled. Produced by Lion Television US, the season finale of MURDER UNDER THE FRIDAY NIGHT LIGHTS airs Tuesday February, 8 on ID at 10/9c.

"The first season of MURDER UNDER THE FRIDAY NIGHT LIGHTS transported our viewers to passionate high school football communities all across the country to witness what happens when the Friday night lights shut off and the town's beloved team finds themselves embroiled in the center of a tragic crime," said Jason Sarlanis, President of Crime and Investigative Content. "Our ID Addicts made this series an instant hit and we are happy to give them another season with fresh stories about shocking crimes behind America's favorite pastime."

Over the course of the series' six episodes, MURDER UNDER THE FRIDAY NIGHT LIGHTS showcased some of the most notorious and tragic cases that wreaked havoc on devoted high school football towns across the country. From the mysterious disappearance of a gifted player and a small Texas town's football star's brutalization of the local cheerleaders to a beloved coach who inspired both his team and his community being tragically gunned down, among other unbelievable crimes, MURDER UNDER THE FRIDAY NIGHT LIGHTS illuminated just how local authorities investigated these cases and the devastation these strong, tight knit communities faced in their wake.

In one the most gripping episodes this season, the finale of MURDER UNDER THE FRIDAY NIGHT LIGHTS will feature the death of a promising rising star in the famous De La Salle high school football program, Terrence "TK" Kelly. University of Oregon bound Kelly was mysteriously shot just before his freshman year, devastating his family, friends, teammates and community who were excited about his bright future. Featuring interviews with Kelly's teammates, including former Jacksonville Jaguars and Oakland Raiders running back Maurice Jones Drew, his family, friends, coaches and the investigators who worked his case, the finale pulls back the mystery surrounding his untimely death.

(New York, NY) -- For many small towns across America, a Friday night spent under the blinding lights of the local high school football stadium cheering the home team onto victory is the glue that holds a community together. But, what happens when the Friday night lights shut off and the town's beloved team finds themselves embroiled in the center of a tragic crime? How does a community so devoted to football reckon with the aftermath - one that may force them to either cope with the devastating loss of one of their own or look at their treasured team and players differently? A new series from ID takes an unflinching look at the shocking and tragic cases of dangerous obsessions, brutal violence and even murder surrounding local high school football teams, tarnishing the sport these communities hold sacred. Produced by Lion Television US, MURDER UNDER THE FRIDAY NIGHT LIGHTS premieres Tuesday, January 4 at 10/9c on ID.

Featuring cases from across the country, accounts from those who knew these crimes intimately, and gripping archival footage, MURDER UNDER THE FRIDAY NIGHT LIGHTS showcases how a tragedy that happens off the field can have ramifications far beyond the championship game. From a football player in a small Texas town terrorizing his team's cheerleaders to a promising football star gunned down before he could start his freshman season at University of Oregon, this new series gives viewers a first-hand account of tragic crimes that have not only turned the lives of the high school football players on these teams upside down - but have torn entire communities apart.

Over the course of six episodes, MURDER UNDER THE FRIDAY NIGHT LIGHTS showcases exactly what happens when football is the lifeblood of the town... and real blood is spilled.

"High school football is a bedrock of small town America where the hometown team is often the centerpiece of the local community. But sadly these local traditions can come with an unexpected dark side as the cases in MURDER UNDER THE FRIDAY NIGHT LIGHTS show, " said Jason Sarlanis, President of Crime and Investigative Content. "Uncontrollably jealous teammates, cheerleaders gone missing, and even local authorities going to extraordinary lengths to cover up for the star player; these crimes can have a tragic impact on the whole town and their damage can ripple throughout the community for years to come."

In a small Texas town, a serial rapist stalks and attacks multiple high school cheerleaders, before graduating to murder. Detectives discover that the monster behind these horrific crimes is much closer to home than anyone could have possibly guessed.

Where is Tom Brown?

Killer in the Field

A beloved high school teacher's mutilated body lies in a field near her home, leaving behind a baffling trail of evidence. One suspect tells a story that makes no sense, but the real killer's motives are as confusing as they are terrifying.

In a struggling Pennsylvania coal town, where high school football is king, the killing of a Mexican immigrant splits the community. When star players emerge as suspects, some locals engage in a coverup that is almost as shocking as the murder.

Do It For Juan

As a quarterback and then as coach, Jaun Josephs led his Louisiana high school football team to multiple victories. When he's inexplicably gunned down, his community unites to bring his killer to justice.

A cold-blooded murderer takes the life of local football hero TK Kelly. The high school standout had carried the dreams of his small California city on his shoulders, but for someone close to TK, jealousy of the star was motivation enough to kill.