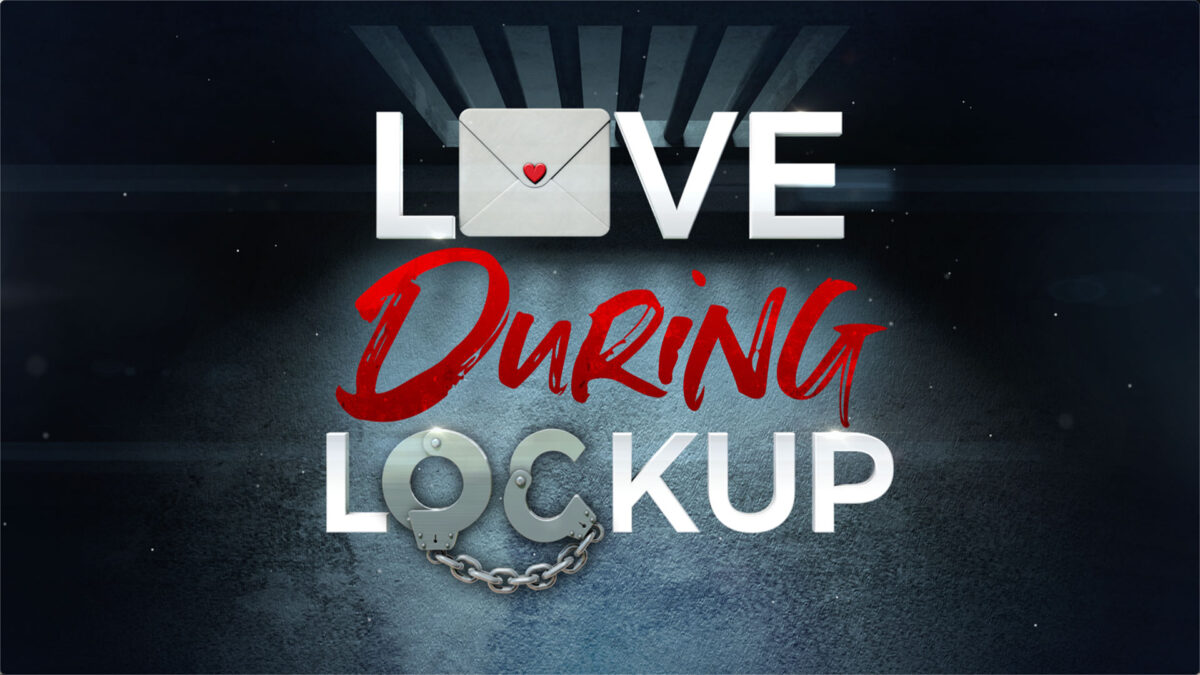 Love During Lockup SEASON 2 Renewed On WE tv

New York, NY - September 22, 2022 - More fiery couples are ready to navigate "Love During Lockup" in WE tv's second season of the newest spinoff of the hit franchise, premiering Friday, October 21 at 9pm ET.

Love During Lockup documents the fascinating drama that unfolds when ordinary people first decide to pursue relationships with prison inmates and face an early dating period filled with a very specific set of unique challenges. Lonely non-cons and 'hot' felons try to keep their romance alive with snail mail letters, expensive phone calls, occasional video visits, and prison proposals... all while having to endure the heartbreak and frustration of the unpredictable prison system. Season two follows four new couples, an eager bachelor, and a returning singleton who can't resist the lure of paramours in the clink. With more drama, mystery, and crazy reveals than ever before, will these couples have love that lasts until release?

Meet the romance-ready civilians and inmates:

Battling a feeling of loneliness, Chelsea found herself checking out a Facebook inmate pen pal group, where she met Michael. Ever determined, Michael began to teach himself ASL to connect with Chelsea - a feat no man had ever attempted for Chelsea, who is deaf. Only having communicated in 30-second videograms and letters, she hopes a planned prison visit will give them the chance to meet face-to-face so they can finally sign in person. But will the surprising secret she learns about Michael during their first visit doom the relationship?

Falling in love with an inmate was the last thing Emily expected, especially amid pursuing a master's degree in criminal justice. However, after connecting with the charming Dauri, via a pen pal ad, it now seems like this powerhouse will let anything slide, even scams and cheating - but only if it comes with a big ring... that she's using his stimulus money to buy! Though they've been together for four years, Emily has never actually seen Dauri in person and their friends can't help but question her choices and if she's hiding something or doing some scamming of her own. Could the non-con be conning the inmate this time?

"Jersey Girl" Melissa's quest for prince charming had come up short, until one day at work as a mail carrier, she came across inmate letters. This led her to an unexpected prison pen pal of her own... her old high school crush, Louie. Though these love birds have crossed paths in the past, they ran in separate circles and Melissa couldn't resist this opportunity to re-connect. Facing overall disapproval from her outspoken family, her father's refusal to walk her down the aisle, and feelings of loneliness that lead her to a prison wives group... Melissa remains madly in love and determined to move to Georgia to be finally be with bad boy Louie.

After a messy divorce, Jessica pursued a career in Corrections Nursing as a way to get over her ex and have a sense of control over men. Then, everything changed when she met inmate Dustin and she chose to sacrifice her career to follow her heart. Although she lost her job, Jessica gained the love of her life and is now ready to uproot her life and move to Tennessee to be with him after his release - but not without meeting his family first.

Mark is an ambitious man with two businesses and love of travel and adventure. Despite his busy schedule, Mark has set aside time to find "the one." After months of failed dating app connections, Mark came across an inmate pen pal group on Facebook and his natural curiosity led him down a rabbit hole. What started on a whim has turned into a quest for love and Mark is sure there are incredible women who are his type - "crazy girls" - waiting for him. Never one to put all his eggs in one basket, using multiple prison pen pal groups, this bachelor hopes of one day turning an emotional connection into a physical one.

The ultimate serial inmate dater, Tai, is back! Despite her friends trying to get to the bottom of why such a catch always goes for troubled men, Tai continues pursuing jailbirds including her #1 inmate Hottie, who proposes even though Tai has met his girlfriend, Boston. Never a man's second choice and with options aplenty, Tai is also talking to inmate BB and new squeeze Dough Boy when her boss at the funeral home, Rinaldo, starts to have feelings for her and urges Tai to go for a safe choice like him. How will Tai juggle her engagement, several inmate boyfriends, and a free world man? Will one of her locked-up lovers find out about her secret relationship on the outside?

Love During Lockup Season 2 (WEtv Original)
New Season Premieres Friday, October 21
The newest and third installment of the 'Love After Lockup/Life After Lockup' franchise, follows even more riveting firsts through the early stages of love, with plenty of romance, suspicion, and investigation, all long before a scheduled prison release. Every non-con has a unique strategy for finding love behind bars - whether they only seek drug offenders who are believed to be nonviolent, or a prison bae pushing a wrongful conviction. Other lonely civilians are simply on the hunt for their very own 'hot felon,' with the model mugshot to prove it. Voracious viewers of the franchise are in for more drama, more mystery, scams, catfishing, and more crazy reveals than ever before. 'Love During Lockup' will document the fascinating drama that unfolds when ordinary people first decide to pursue relationships with prison inmates, and an early dating period filled with a very specific set of unique challenges.

WE TV EXPANDS HIT FRANCHISE WITH A THIRD COMPELLING SERIES "LOVE DURING LOCKUP" PREMIERING FRIDAY, JANUARY 7 AT 9 PM ET ON WE TV

New Tales, Twists & Turns Through The Early Stages of the Search for Love Behind Bars

WE tv announced today that "Love During Lockup," the newest and third installment of the 'Love After Lockup/Life After Lockup' franchise, premieres Friday, January 7 at 9 PM ET. New episodes become available on popular AMC streaming service ALLBLK, every Tuesday following their premiere on WE tv.

"Love During Lockup" follows even more riveting firsts through the early stages of love, with plenty of romance, suspicion, and investigation, all long before a scheduled prison release. Every non-con has a unique strategy for finding love behind bars - whether they only seek drug offenders who are believed to be nonviolent, or a prison bae pushing a wrongful conviction. Other lonely civilians are simply on the hunt for their very own 'hot felon,' with the model mugshot to prove it.

Voracious viewers of the franchise are in for more drama, more mystery, scams, catfishing, and more crazy reveals than ever before. 'Love During Lockup' will document the fascinating drama that unfolds when ordinary people first decide to pursue relationships with prison inmates, and an early dating period filled with a very specific set of unique challenges.

The explosive supertease released today introduces four new couples, as well as two singletons who just can't keep themselves (and their bank accounts!) away from potential paramours in the clink. Further info on each story below.

Things have moved fast for Haley and Dalton, whose paths crossed prior to Dalton's prison sentence, but Haley is expecting the big proposal and a ring once Dalton gets out... whenever that might be. In the meantime, Haley has dipped into her car accident settlement money to pay for Dalton's legal fees-- a lot for the single mom who works six days a week cleaning homes. Even worse, Dalton has shown a jealous streak and doesn't like that Haley and her ex-Jarrett peacefully co-parent their 6-year-old son Hendrix. But is Dalton making a big deal of Haley's ex to deflect from his own ex-girlfriend issues?

Indie was scrolling through TikTok one day and stumbled upon a video of an extremely attractive inmate, who she later dreamt about and ultimately pursued. However, Indie's mom is a bounty hunter who has started an investigation on Harry and will use the full power of her profession to prove Harry is nothing more than a criminal. When Indie takes the advice of a trusted psychic, whom she consults everything with, and packs up her daughters' life to move to Ohio, she might be left alone in a new city regretting everything as she awaits Harry's supposed release.

Santiba is a recent divorcee who lost a hundred pounds and gained the man of her dreams- inmate Talsey. She met Talsey through Writeaprisoner.com, and they hit it off. He's spent almost a decade behind bars, and upon his release Santiba plans to move from Maine to Georgia to be together, even though they've never met in person.

Gabrielle and Chris met through Gabrielle's cousin's incarcerated boyfriend, and after quickly falling for one another, Chris decided to shower Gabrielle with the finer things-- including a house, a BMW, and a $5000 engagement ring. Christopher's family is worried she may be using him for his money. Chris' family has plans to confront Gabrielle and her intentions. Meanwhile, Gabrielle's family also have doubts of their own, especially her mother, who calls Gabby a 'maneater' because of many failed engagements. Will this be any different?

Max is getting his masters in biochemistry at Georgetown University. You'd think with looks and the brains, Max could find a woman in the free world - but he's been burned one too many times before. Max discovered WriteAPrisoner.com on a study break and loved that he could scan through for only the best-looking women. He's always dated models and influencers. How will his friends react to his new method of meeting women? Max also has a very popular account where he sells steamy content for a premium price, often alongside his roommate Alessa. Max is worried Alessa wants a relationship with him, and he thinks it might be time to cut her off before she gets the wrong idea.

Tai's passion for forensics led her to a career as a mortician and it also led to dating inmates. Tai keeps a shoebox of papers containing an updated log of her multiple inmates, their cases, and details about their sentences and lives. Her ideal profile is anyone pictured in a white t-shirt and grey sweats with a minimum sentence of five to ten years. Her interest in inmates has led her to four failed relationships, but Tai hopes her current relationship with inmate Rio, aka "Hottie," will be the reason she keeps her love alive. But will a mystery call break Tai's heart?