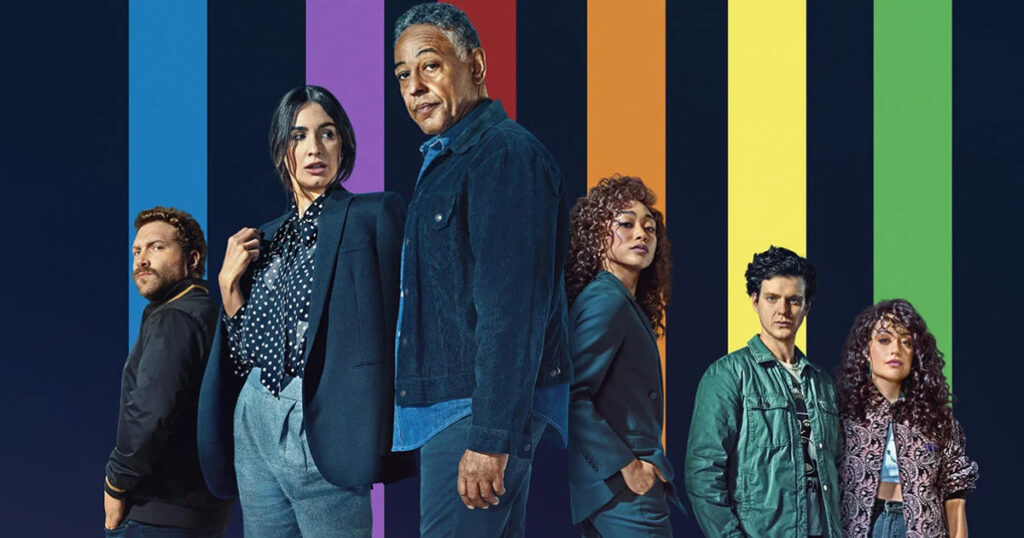 WITNESS A CRIME 25 YEARS IN THE MAKING WHEN SUSPENSEFUL HEIST DRAMA "KALEIDOSCOPE" CRACKS OPEN THE NEW YEAR, SUNDAY, JANUARY 1, ONLY ON NETFLIX

Every Episode is a Puzzle Piece as Viewers Watch Episodes in Unique Orders, Entering the Heist at Different Moments in Time

Spanning 25 years, Kaleidoscope (previously titled Jigsaw) is an all-new anthology series following a crew of masterful thieves and their attempt to crack a seemingly unbreakable vault for the biggest payday in history. Guarded by the world's most powerful corporate security team, and with law enforcement on the case, every episode reveals a piece of an elaborate puzzle of corruption, greed, vengeance, scheming, loyalties and betrayals. How did the crew of thieves plan it? Who gets away with it? Who can be trusted?

Loosely inspired by the real-life story where seventy billion dollars in bonds went missing in downtown Manhattan during Hurricane Sandy, Kaleidoscope consists of eight episodes spanning from 24 years before the heist to 6 months after.

The compelling crime anthology series takes a non-linear approach to storytelling, building intrigue and suspense uniquely, with Netflix members each having a different immersive viewing experience. Some members may start with certain episodes (like episodes "Yellow" or "Green"), then move deeper into their own personal viewing order with varying episodes ("Blue" or "Violet" or "Orange," followed by "Red" or "Pink") until the epic "White: The Heist" story finale.

All viewers will eventually see all episodes, but the order in which they watch the episodes will affect their viewpoint on the story, the characters, and the questions and answers at the heart of the heist. How will you experience the colors of Kaleidoscope?

· "Red: The Morning After the Heist"

Meet The Crew of Thieves, The Corporate Security Titans with an Unbreakable Vault &The Agents on the Case

The Crew of Thieves

The Leader. Leo is whip-smart, intense and driven, with an engineer's mind and a meticulous eye for detail. He became a thief at a young age -- and though he had a chance to get out, he couldn't stay away from the criminal life and his relapse cost him his family and his freedom.

An attorney by day, she is equally at home on a gun range or gallery show as she is in the courtroom. Although she plays things fast and loose, deep down she's a passionate soul who will do anything to protect the few people close to her.

The crew's demolitions specialist, Judy is headstrong and independent -- an eccentric spitfire with a sarcastic edge who is clever and talented enough to stay a step ahead of her mistakes.

A chest-puffing alpha male with a knack for safecracking and pushing people's buttons, Bob is attractive enough to be a threat and smart enough to be dangerous to anyone who gets in his way when he's on the hunt.

A small-time smuggler with a big-time passion for life's epicurean pleasures, Stan's got a mouth that never stops running and the heart of a hopeless romantic. Loyal to a fault, he's willing to risk it all for the object of his desire -- even if it means giving up the comfortable life he's built for himself.

Shaggy and technical-minded, RJ is a self-taught engineer, a brilliant mechanic and car customizer, and a driver extraordinaire. What he excels in tech know-how, he lacks in common sense and people skills, but his loyalty to Leo knows no bounds. When he's invited to join the crew, he jumps at the chance to prove his worth.

The Corporate Security Team with the Unbeatable Vault

A former thief who has reinvented himself as a top tier security expert, Roger is a salesman with an uncanny ability to manipulate people to his ends. Loyal, to a point, but his own ambitions and needs will win out every time.

Intelligent, ambitious, and adaptable, Hannah is a woman who wears many hats - and is driven by far more than money. As a chameleon who flows between the world of high-stakes finance and low-lying crime, she will have to use everything in her bag of tricks to find a way up and out.

Liz is Hannah's younger sister, a free spirit and aspiring DJ/immersive dance captain. She's a source of joy to Hannah, but her laissez-faire attitude conflicts with Hannah's deep work ethic. Together, they'll have to find a way to support each other and work hand-in-hand if they want to come out on top.

Carlos is Roger Salas's right-hand man and head of security -- not just for the company, but for Roger himself. Loyal and intense, Carlos is the one who Roger turns to when he needs something handled off-book. Very few people really understand what Carlos does for Roger, but they all know it's best to leave him a wide berth and not get in his way.

The Agents On The Case

Driven, damaged and tenacious to a fault, FBI Agent Nazan Abassi is the raging fire that threatens to burn the crew of thieves down - as long as those flames don't consume her first.

Special Agent Samuel Toby is a boy scout in the FBI, the kind of guy who'd take a strawberry milkshake over a vodka on the rocks. He's got a sharp mind, and an immense admiration for fellow Agent Nazan Abbasi that seeps over from professional to personal. He's attracted to her intelligence and skill in the field and devotedly aids her as she attempts to track down the crew. But when he realizes Nazan is way too deep into her obsession, he'll have to choose whether his priorities lie in being on the right side of his career, or the right side of justice.