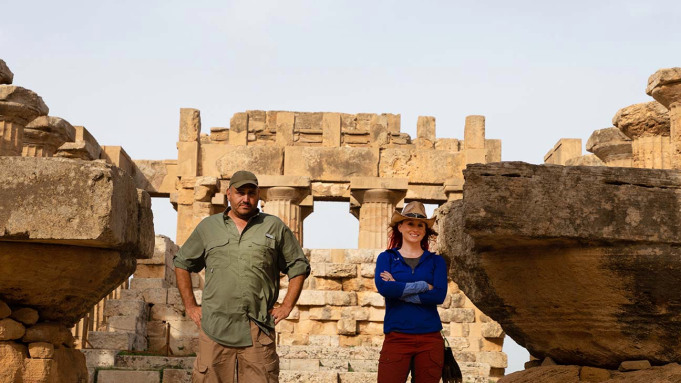 (Los Angeles) - The Lost City of Atlantis has fascinated philosophers and historians for nearly 2,400 years and is known as one of the most extraordinary mysteries of the world. With a new trail of evidence, expert Stel Pavlou and volcanologist Jess Phoenix set out on a quest to solve the greatest archaeological mystery of all time - the rediscovery of Atlantis. The all-new series, HUNTING ATLANTIS, from Revelations Entertainment, premieres Wednesday, June 2 at 9 PM ET/PT on Discovery.

Unearthing sunken cities, archaic artifacts, and geological catastrophes, Stel and Jess travel around the world exploring ancient sites in search of the legendary lost city. Expert Stel Pavlou, is the author of the groundbreaking new theory on the date for Atlantis' destruction near the beginning of the fifth millennium BCE. Volcanologist and extreme explorer, Jess Phoenix's expertise is in volcanic hazards and her work has taken her to six continents, where she has organized and led over 25 scientific research expeditions. Together, they follow clues and uncover evidence pointing to the fall of the legendary lost city.

Throughout the season, Stel and Jess' expedition leads them to incredible destinations including the Black Sea where they investigate a 7000-year-old skeleton buried in gold treasure, a mysterious Greek island where an advanced ancient civilization built a massive marble pyramid and unexplored archeological sites along the Adriatic coast of Croatia where underwater relics from an ancient bridge system lead them to an age-old legend of a lost city and into a massive sinkhole that could swallow a city whole.