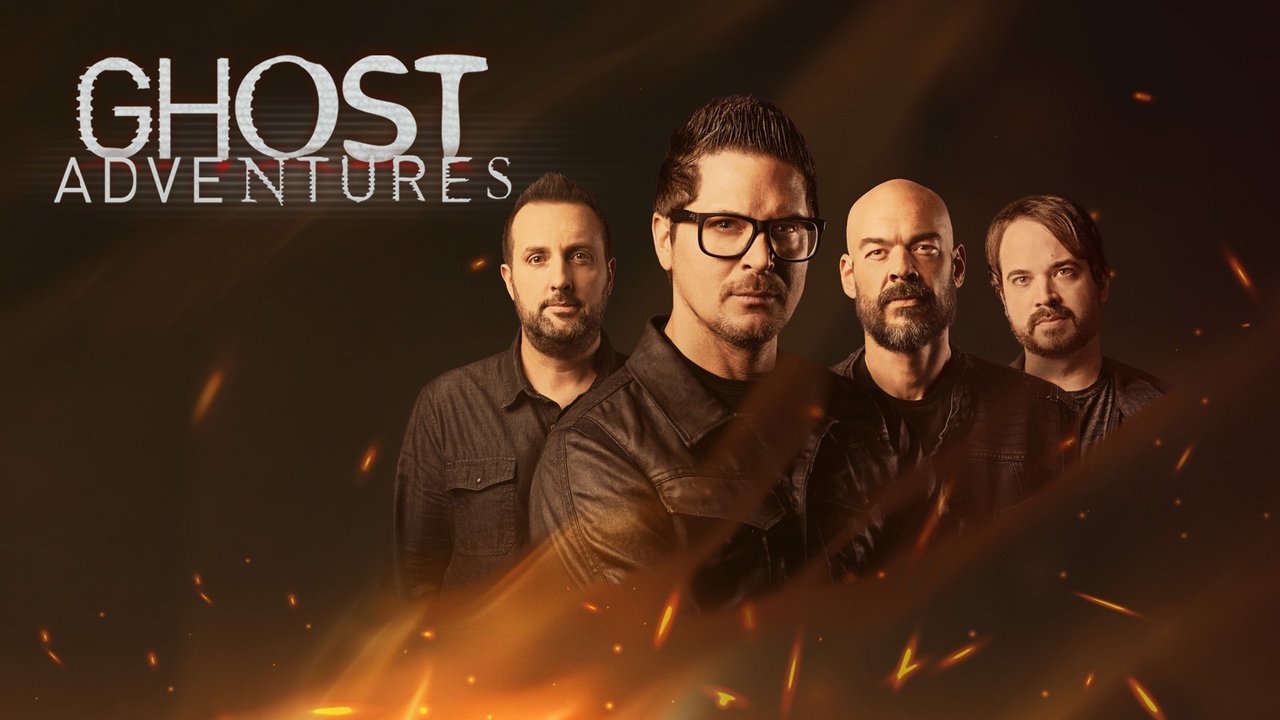 GHOST ADVENTURES
New Season
Premieres Thursday, September 15 at 10 p.m. ET/PT on Travel Channel and Streaming on discovery+
Paranormal investigators Zak Bagans, Aaron Goodwin, Billy Tolley and Jay Wasley continue their terrifying travels to haunted destinations in a brand-new season of GHOST ADVENTURES, where they meet with locals, eyewitnesses and experts in an attempt to piece together the haunted history of each site. They then begin their "lockdown" investigation, using the latest scientific gadgets and technology in an effort to obtain physical evidence of the paranormal and uncover the truth behind each haunted mystery. (Nine one-hour episodes) #GhostAdventures

Bagans to Produce and Star in Multiple New Supernatural Projects; New Episodes of Hit Series Ghost Adventures to Continue Through 2025
NEW YORK (April 13, 2022) - Paranormal superstar Zak Bagans has inked a new three-year deal with discovery+ that will bring more of his signature spooky and evocative content to the digital streaming platform through 2025. Under the agreement, the paranormal investigator, executive producer and filmmaker will create, star in and produce over 100 hours of supernatural and horror content for the discovery+ portfolio, including new seasons of the hit series Ghost Adventures, semi-scripted series The Haunted Museum and several additional specials and untitled creative projects in the works.

"We are thrilled to continue our incredible relationship with Zak to create more groundbreaking paranormal content in the years ahead," said Matthew Butler, General Manager, Travel Channel & Paranormal Streaming Content. "Zak's authentic voice, engaging style, vivid storytelling and creative vision are a true asset to our streaming portfolio, generating gripping content that pushes this genre to new heights. He is an icon of the brand. There is so much more to come, and we are eager to deliver it to our fright-loving viewers."

Ghost Adventures debuted as a self-titled documentary, following Bagans and his team of paranormal investigators as they search for evidence of the afterlife. It was commissioned into a series for Travel Channel in 2008 and quickly rose as the network's highest-rated show spawning a number of specials and miniseries including Ghost Adventures: Screaming Room, Ghost Adventures: Quarantine, Ghost Adventures: Cecil Hotel, Ghost Adventures: Horror at Joe Exotic Zoo and more. The series launched on discovery+ in January 2021 and has consistently trended as a top five franchise on the platform, that features a variety of content across popular passion verticals including lifestyle and relationships; home and food; true crime; paranormal; adventure and natural history; as well as science, tech and the environment, and a slate of high-quality documentaries. Bagans recently joined forces with filmmaker Eli Roth on the new semi-scripted series The Haunted Museum - a cinematic take on the tales of terror behind the most haunted artifacts on display in Bagans' Las Vegas museum. Bagans appeared as a regular guest on this past season of Food Network's Halloween Wars providing inspiration for bakers' spooky confections. His new deal encompasses more investigative-style programs and scripted content as well as brand-new spin-off series, innovative creative projects and signature tentpole events.

"Fans of paranormal have flocked to discovery+ to watch our deep collection of unexplained and spooky series all year round. This devoted fanbase has been highly engaged, making paranormal a top performing genre on the service," says Lisa Holme, Group SVP Content and Commercial Strategy, discovery+. "A true leader in the space, we can't wait to do even more with Zak in the coming years that we know will delight his fans."

The full library of Ghost Adventures content, along with The Haunted Museum, is available to stream on discovery+.

THE WAIT IS OVER - "GHOST ADVENTURES" IS BACK WITH FRIGHTENING NEW PARANORMAL INVESTIGATIONS BEGINNING THURSDAY, MARCH 10 ON DISCOVERY+

The Crew Confronts Eerie Activity Inside Eminent Locations Including the Home of American Author John Steinbeck, the Los Angeles Police Museum, a Nevada Winery and More
Thursdays are once again on lockdown when Zak Bagans, Aaron Goodwin, Billy Tolley and Jay Wasley return with all-new episodes of GHOST ADVENTURES, beginning Thursday, March 10 exclusively on discovery+. The Ghost Adventures crew embark on terrifying new ventures, confronting fierce paranormal activity in locations such as the childhood home of famed author John Steinbeck, a historic and mysterious Montecito mansion that Bagans feels has personally called to him, the Los Angeles Police Museum full of notorious artifacts, a doll shop overwhelmed by strange activity, a Nevada winery plagued by a deadly curse and more.

On a dedicated mission to understand and capture evidence of the afterlife, the Ghost Adventures team respond to incidences of ghostly activity that has left those in its wake frightened and searching for answers. Zak, Aaron, Billy and Jay first meet with eyewitnesses and experts in an attempt to piece together the haunted history of each site. Using advanced cutting-edge technology, their unique paranormal intuition and more than two decades of experience, the team then begins their "lockdown" investigation in an effort to obtain physical evidence of the paranormal and a better understanding of this unexplained phenomena.

"I can't wait for everyone to see these investigations," said Bagans. "What we experienced and were able to capture is simply insane. I'm talking about highly intelligent spirits, prolific poltergeist activity and incredibly powerful energy that severely affected all of us, physically and emotionally. The evidence is mind-blowing."

Zak Bagans senses a historic mansion with a tragic and mysterious past in Montecito, California, has called to him. When the crew attempts to re-create a séance in the home's majestic main hall, they capture some of their most compelling evidence to date.

Zak Bagans and the Ghost Adventures team gather in La Crescenta, California, to investigate an abandoned home that has been infected with evil. The dark forces that dwell there tore a family apart, and anyone who dares step inside the house is left fearing for their life.

The Ghost Adventures team arrive in Pacific Grove, California, to investigate a doll shop overwhelmed by dark energy. Shelves of dolls and puppets appear to offer up disturbing clues as the search for evidence leaves the team drained and disoriented.

Zak Bagans and the crew investigate a Utah mansion soaked in tragedy and bloodshed. Unexplained paranormal activity has the new owner desperate for answers, and the team is concerned that a portal to hell has unleashed a negative entity into the home.

The team investigates poltergeist activity at a historic saloon in Paso Roble, California. The activity is so relentless that staff and guests don't feel safe on the premises. Zak Bagans suspects it may be the sole work of an entity called "The Old Hag."

The crew is called to the Los Angeles Police Museum to confront a dark presence that has invaded the once-thriving precinct. Zak Bagans believes the disturbing activity is linked to the macabre artifacts from some of LA's most notorious crimes.

The Ghost Adventures crew are called to a desolate Nevada town to investigate a winery allegedly built atop sacred burial grounds. Fatal accidents plague the property, and the terrified staff is stalked by an evil presence. Can Zak Bagans get to the bottom of the deadly curse?

Zak Bagans, Aaron Goodwin, Billy Tolley and Jay Wasley travel to Salinas, California, to investigate the birthplace of iconic author John Steinbeck. For decades, witnesses, including Steinbeck himself, have felt a dark presence in the home. Could a portal be drawing spirits to the property?

Team Locks Down Inside the Real-Life Home That Inspired the Iconic Conjuring Films During Two-Hour Halloween Event
NEW YORK (July 22, 2019) – Zak Bagans and the “Ghost Adventures” team – Aaron Goodwin, Jay Wasley and Billy Tolley – investigate iconic locations that are hotbeds of creepy and unnerving hauntings in all-new October specials that will air during Travel Channel’s “Ghostober” event, which features 31 days of spine-chilling premieres.

The four-part miniseries, “Ghost Adventures: Serial Killer Spirits,” tackles the question: does evil linger? Exploring haunted locations associated with infamous serial killers, the team seeks to document whether malicious energy has been left behind by these sadistic killers and their evil acts.

A two-hour Halloween special, “Ghost Adventures: Halloween 2019” (wt), takes the team to Rhode Island for an unforgettable lockdown inside the real-life home that inspired the iconic horror film, The Conjuring. The home’s hauntings were also made famous by renowned paranormal investigators Ed and Lorraine Warren.

“I’ve investigated a lot of places, but these locations are absolutely terrifying on a whole other level,” said Bagans. “To walk in the same footsteps as these serial killers, where some of the most notorious acts of evil were committed – it severely affects you. The residual energy alone is palpable. And the real-life house that inspired the Conjuring movies – I’m speechless! That has a been a dream of mine to investigate for years and I can’t believe it’s finally happening. It’s beyond legendary. I can’t wait for viewers to experience this terrifying adventure with us.”

Zak Bagans, Aaron Goodwin, Billy Tolley and Jay Wasley embark on a terrifying cross-country journey to document if evil energy lingers within the infamous locations associated with America’s most notorious serial killers. As they delve into each case, they will retrace the killer’s steps, visit known hangouts and speak with leading experts to gain insight on why these sociopaths committed their evil acts. Every Saturday throughout October, viewers will follow the “Ghost Adventures” crew as they investigate locations such as killer clown John Wayne Gacy’s prison cell, HH Holmes’ murder house and the Squirrel Cage Jail, which housed the vicious Jake Bird. The crew will also study the Anson Call House, an abandoned building that many believe has ties to Ted Bundy’s terror spree during the 1970s.

A special Halloween episode of “Ghost Adventures” will petrify viewers as the crew investigates the home of the notorious Perron family, whose horrifying hauntings were portrayed in the film, The Conjuring. The Rhode Island home is one of the most terrifying places in the world and has also been made famous by the work of renowned paranormal investigators Ed and Lorraine Warren, who were called in to help by the Perron family. The Ghost Adventures crew is ready to confront the potentially dangerous consequences of investigating the infamous house.