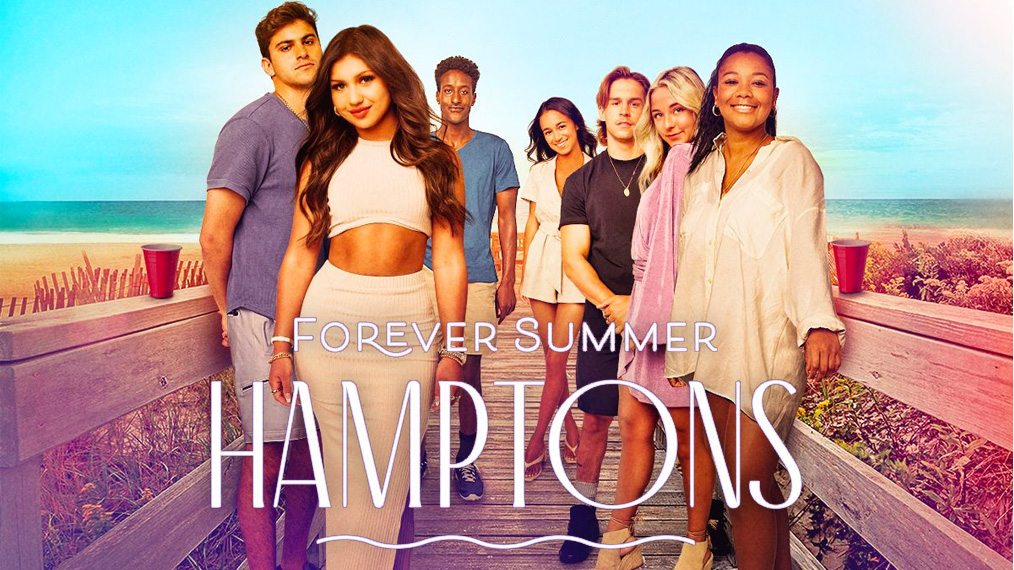 Today, Prime Video released the official trailer and key art for the first season of Forever Summer: The Hamptons. Prime Video also shared details on the cast as part of the trailer release. The series will premiere all eight episodes on Prime Video in more than 240 countries and territories worldwide on Friday, July 15.

Forever Summer: Hamptons is a coming-of-age docusoap, set against the idyllic backdrop of the Hamptons, about a group of college kids from widely different backgrounds, from wealthy New York City kids who descend for the summer to the humble townies. By day, they're working at a seaside restaurant. By night, they are tearing up the town, testing friendships, and exploring love during the hottest days of the year. This group and their friends are chasing the perfect summer at a pivotal time in their lives, when carefree adolescence is about to end. Come September, the stakes and responsibilities will be high, but the summer is theirs for the taking.

Forever Summer: Hamptons is part of Prime Video's slate of reality shows to premiere this summer, along with The One That Got Away, which premiered all 10 episodes on June 24, and Cosmic Love, premiering all 10 episodes in August. These three shows will join Prime Video's unscripted hits like Lizzo's Watch Out for the Big Grrrls, now streaming on Prime Video, and Making the Cut, returning for Season Three this summer.

Avery Solomon (IG: @averysolomon_): Avery Solomon was born and raised on the beaches of Westhampton. She is a current student at Tulane University, majoring in psychology and minoring in public health with hopes of later attending medical school. When she isn't studying, you'll find her having a party in New Orleans. She lives by the phrase "Why dress down when you can dress up?" Making life fabulous is her thing. While she loves college life, she always looks forward to her summers back home in the Hamptons: meeting new people, finding new and exciting things, and living life to its fullest potential. (Photo)

Emelye Ender (IG: @emelyeender): After living in Brooklyn, Emelye Ender moved out to the Hamptons when she was ten and has been going on wild adventures with her friends. From clubbing until 3 a.m. to bartending first thing in the morning, life is never boring with her. She's currently attending online school while traveling, and hopes to follow her TikTok career to Australia with her boyfriend Hunter. (Photo)

Ilan Luttway (IG: @ilan.luttway): Ilan Luttway is a computer science major at the University of Michigan. He is passionate about pursuing academic and professional success, and his French background has offered him a special appreciation for travel, gourmet dining, and fashion. In addition to pursuing a career in television, Ilan plans to use his computer science and data analytics background to market his unique style and taste to build a brand that reflects a new and less constrained sense of masculinity, as well as a focus on building a more sustainable world. He is currently based in New York and will graduate in winter 2022. (Photo)

Habtamu "Habs" Coulter (IG: @habtamu_coulter): Habtamu Coulter is 19 years old and was born in Ethiopia. He was adopted when he was nine and has been living as a Hamptons local since. He is currently attending Castleton University in Vermont, where you can find him shredding on his snowboard. (Photo)

Frankie Hammer (IG: @the.hammer.files): Frankie Hammer lives in East Hampton, New York when he's not traveling on the hunt for big waves, a cold beer, and new places to be seen. All he wants to do in life right now is surf, party, and have a good time. That's fine by him. (Photo)

Hunter Hulse (IG: @hunterhulse_): Hunter has been a Hamptons local his whole life. If he's not dirt biking, surfing, or skating around town with his mates, Hunter is "burning the bitch down with them." He loves his bruvs and his girl Ems. Currently in the process of using his econ major from the University of Maryland to build a marine construction company. With a little more growth he'll be able to travel the world with financial freedom, accompanied by big Ems. (Photo)

Reid Rubio (IG: @reidrubio): Reid Rubio was born and raised in Westhampton Beach and graduated from Syracuse University. He currently works as a software engineer during the day and loves going to raves at night. While he lives in New York City now, he grew up by - and loves to spend time at - the beach. (Photo)

Juliet Clarke (IG: @juliet_clarke): Juliet Clarke is a local resident of Long Island, and spent four years pursuing a bachelor's degree in new communications media from SUNY Cortland. She spent her summers growing up working with food and enjoying the sun. Although the Hamptons will forever have her heart, she desires to travel the world and the country to find a place more suitable for her. (Photo)

Milo Munshin (IG: @milo.m2): Milo is a Hamptons native and is currently a student at The New School in NYC. He is enthusiastic about photography and has had photos published in The Washington Post. While he loves the City, he feels most at home in Sag Harbor on the beach. (Photo)

Shannon Sloane (IG: @shannon_sloane): Shannon was born and raised in Sag Harbor. She is currently a student at The Fashion Institute of Technology in NYC, where she hopes to have a career in digital marketing and public relations after graduating. Shannon is passionate about art, health and wellness, and all things fashion. She currently lives full time in Manhattan, where she enjoys her fast-paced lifestyle. But nothing compares to her summers spent on the beaches in the Hamptons with friends and family. (Photo)

Lottie Evans: Lottie is a Hamptons local and recent college graduate that grew up on the water sailing and boating. She has spent four years as an ocean lifeguard and played on various competitive travel sports teams and is currently focused on building a career in marketing. In her spare time, she likes to be on the water and play tennis. (Photo)

Sophia Messa (IG: @sophiamessa): Born and raised in New York City, Sophia Messa is an up-and-coming singer and actress, and a first generation American, born to immigrant parents from Brazil and Ukraine. Growing up fast in the arms of downtown Manhattan, Sophia is a vocal powerhouse with the performance chops of a seasoned pro, and the personality to match. Sophia attended The Professional Performing Arts School, and The Lee Strasberg Theatre & Film Institute, where she was classically trained in vocal performance and opera. Inspired by the world around her, she began writing and recording original music during her freshman year of high school, and was accepted into the Berklee College of Music her senior year. Just three weeks in, Sophia signed a record deal and headed back to New York to focus on her music full time. (Photo)