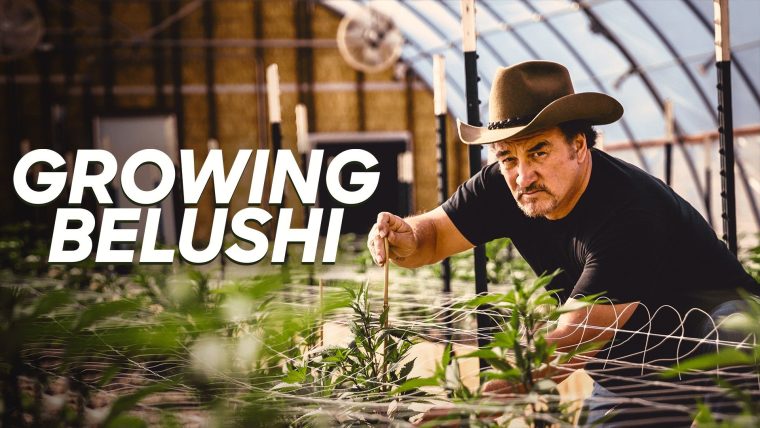 Ain't no mountain high enough for Jim Belushi! After growing his passion into a successful and bustling business, Jim and his team of farmers are on a mission to rebrand and rebuild their cannabis farm from small and boutique to premium high-end for the masses. In an effort to meet increasing national demand, they're bringing state of the art technology, cultivation methods, new equipment and new facilities to Belushi's Farm - and the results are as promising as they are challenging. It's a season all about regrowth and growth, and we've got high hopes for Belushi's Farm!

"In this season of GROWING BELUSHI, you'll witness my evolution from hobby boutique cultivator to multi-state business operator. This year is not only about the expansion of our business, but our mission to spread awareness about the plant as a pathway to healing," said Belushi. "And, you'll learn about the burgeoning industry, how it intersects with politics and how I handle the pressure - between weathering the elements, rebuilding the farm, and overseeing Chris' new restaurant... . well, there are many challenges to tackle with laughs along the way."

This season, the crew is faced with the challenge of farming - weather, mold, pests - and re-growing their unique proprietary strains after they were destroyed last season (blame Jim!). With the help of some friends and familiar faces - including Dan Aykroyd, Larry Joe Campbell, Guy Fieri, and cousin Chris - it's a joint effort to get things back on course and achieve greatness within the competitive world of cannabis.

And of course, there are many new adventures, such as cousin Chris building and operating a tiny restaurant with one table on the farm called the Engjell Café, which introduces a whole new element of stress and comedy as Chris experiments with cannabis-infused cuisine. As Jim likes to say with a smile, "Reservations are tough, the food is great, but with one table and free food, the Engjell Cafe is the most exclusive restaurant in southern Oregon. The only problem is the owner is a pain in the a**."

This unique brand of edutainment is equally funny as it is informative. GROWING BELUSHI sheds light on Jim's journey of self-discovery and the incredible effort it takes to build and operate a legal medicinal cannabis farm with the dream of helping others on their pathway to heal and thrive.

Actor Jim Belushi (According to Jim, SNL) is a man of many talents - actor, singer, dancer and now... legal cannabis farmer. Using his many talents, combined with an immense passion, Jim is ready for his next stage in life - building a cannabis business from scratch in southern Oregon. Informative, mischievous and moving, the all-new series, GROWING BELUSHI, premieres on Discovery Wednesday, August 19 at 10 PM ET/PT and is produced by Original Productions and Live Nation Productions.

"This is much more than a business for me. I've seen the positive impact that cannabis has had in treating people from around the world," said Belushi. "Everything grows in Growing Belushi. The Cannabis, the business, the family. And especially me. We almost called it Growing Pains!"

True to heart, Jim has decided to dedicate his life to starting and running a flourishing legal cannabis farm. As they navigate the many challenges of this newly legalized industry, Jim and his ragtag team of farmers have an opportunity to follow their passion and find success in something they believe in. Joined by his cousin Chris and with appearances from Dan Aykroyd, Judy Belushi and a cast of misfits (including Jim's own family), as well as a musical appearance by The Blues Brothers, GROWING BELUSHI will take Discovery's audiences inside Jim's world and show the incredible effort it takes to build a legal cannabis operation.

"We are always looking for a show that takes you by surprise and this one did - it's fun and funny and has a lot of heart. I think people will see Jim Belushi in a whole new way after watching," said Nancy Daniels, Chief Brand Officer, Discovery & Factual.

"Live Nation has had a long, meaningful relationship with Jim Belushi personally and through the Blues Brothers and House of Blues, so we are excited to help with sharing his story of Belushi Farms with Discovery's audiences," said Michael Rapino, CEO of Live Nation.

"We are thrilled to continue our long-running partnership with Discovery which has included the Emmy-winning Deadliest Catch, along with the recent spin-off, Deadliest Catch: Bloodline," said Jeff Hasler, President of Original Productions. "We've always been about providing a platform for big dreams and ambitious stories. No one has a bigger dream and more ambition than Jim Belushi."

What began in 2015 as a meager 48-plant crop, Jim's farm today encompasses a sprawling and spiritual 93 acres along the Rogue River in southern Oregon, offering a range of brands from Belushi's Secret Stash (with Jim's favorite strain Cherry Pie) to Captain Jack's Gulzar Afghanica (a rare strain from the Hindu Kush region that became known in the '70s as "the smell of SNL.")

Having suffered the loss of his brother John to an overdose - as well as having experienced his own journey of learning and healing with cannabis - Jim has become an outspoken advocate for the positive medical benefits of cannabis including pain management and improving quality of life. The series will shed light on Jim's journey of self-discovery and the incredible effort it takes to build a legal cannabis farm with the dream of helping others thrive.

In addition to watching the show on Discovery, viewers can stream GROWING BELUSHI by downloading the Discovery GO app. Viewers can join the conversation on social media by using the hashtag #GrowingBelushi and follow Discovery on Facebook, Instagram, and Twitter for the latest updates.