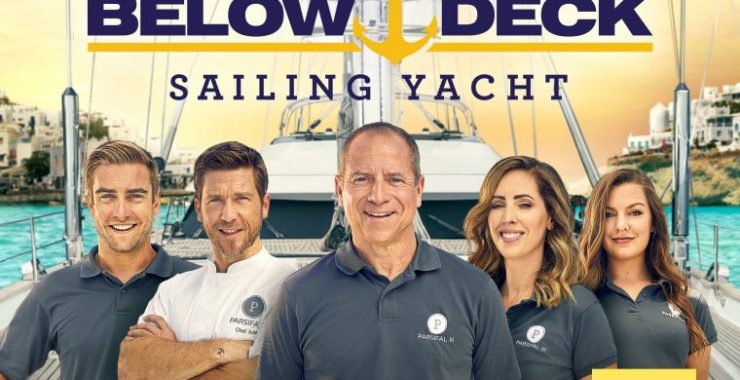 This season, Gary and Daisy leave their contentious dynamic behind as they bring their relationship into uncharted waters. Meanwhile, Daisy's desire for smooth sailing with her team is endangered as resentments between the stews emerge and threaten the hierarchy of the boat. In the galley, chef Marcos strives for the same standard of excellence he is accustomed to on land but is pushed to his limits to sustain that at sea. With a twisted love pentagon, a litany of gruesome injuries and a dangerous, potentially vessel-crippling accident that threatens the safety of everyone on board, this is Parsifal III's most epic charter season yet.

Catch up on the first two seasons of "Below Deck Sailing Yacht" streaming now on Peacock.

BRAVO RETURNS TO THE HIGH SEAS AS SEASON TWO "BELOW DECK SAILING YACHT" PREMIERES ON MONDAY, MARCH 1 AT 9PM ET/PT

Los Angeles, CA - January 22, 2021 - Bravo boards the Parsifal III for another charter season of "Below Deck Sailing Yacht'' premiering on Monday, March 1 with a supersized episode from 9pm-10:15pm ET/PT. The stakes are high as Captain Glenn Shephard puts his trust in an all-new crew as they sail along the sparkling coast of Croatia to provide an unforgettable, luxurious experience for the guests and their over-the-top requests. For a sneak peek, visit: https://www.bravotv.com/below-deck-sailing-yacht/season-2/videos/your-first-look-at-below-deck-sailing-yacht-season-2

Season one of "Below Deck Sailing Yacht" averaged 2.7 million total viewers, 1.6 million P25-54, and 1.3 million P18-49 across all linear and digital platforms to date and ranked as the #3 new series on cable last year among P18-49 and P25-54. Additionally, the inaugural season was the network's highest-rated new reality series in three years among all key demos.

This season, Captain Glenn is joined by chef Natasha De Bourg, chief stew Daisy Kelliher, chief engineer Colin Macrae, first mate Gary King, second stew Dani Soares, third stew Alli Dore and deckhands Sydney Zaruba and Jean-Luc Cerza Lanaux. When the chief stew and chef discover they're on different pages, mistrust and miscommunication makes for an extremely volatile working relationship that impacts everyone on board. As department heads undermine each other's authority, arguments trickle down the chains of command as tension reaches an all-time high between the interior and exterior teams. With new safety protocols in place, the crew must stay on the yacht in between charters, blurring the lines professionally and personally, leading to a boat-load of nauti-yachties.

Originally from Montreal, Captain Glenn's life has always been dictated by the need to see the world. Early on in his travels, he was invited onboard a 50-foot classic sailboat to work as a deckhand and was immediately hooked and has never looked back. With over 20 years in the industry and 11 years as the Captain on Parsifal III, Glenn has hosted hundreds of high-end guests over many busy charter seasons. Glenn knows how to keep his cool while catering to the uber elite. This laid-back Captain is calm until his limits are pushed. Don't mess with Capt. Glenn!

Born in Trinidad, Natasha De Bourg escaped a difficult childhood and a troubled marriage to take a leap of faith and attend culinary school Europe. After finishing school, she focused on working at top Michelin-star restaurants. Her skills are sharp as a knife and eventually became an executive chef in France before getting yachting. Natasha's headstrong nature often puts her at odds with other crew members - especially her counterpart, Daisy, the Chief Stew.

New Chief Stew, Daisy Kelliher, is considered a yachting legacy. Her grandfather was an Olympic sailor for Ireland in 1964, and her parents - and many aunts and uncles - were yachties. Though Daisy has a lot to live up to when she joins Parsifal III as the new Chief Stew, that doesn't stop her from driving head-first into crew politics and drinking like a true Irish woman. Daisy can always be counted on to give you a piece of her mind and let her hair down to have a good time.

Long-time sailor, Colin Macrae, worked as a Chief Engineer on super yachts for eight years before joining Parsifal III. With a big heart and an impish smile, Colin is more than happy to lend a hand anywhere that he might be needed. But when Colin's kindness gets mistaken for weakness, fireworks fly.

Having captained smaller boats and run the deck on several busy super yachts, Gary's 12 years of experience is apparent in the way he runs his deck team. On one hand, he rules his department with an iron fist but on the other hand, he is never the type to leave a party first. He brims with mischievous charm but his casual flirtation turned real feelings gets him in hot water on and off deck.

After two weeks of dockwalking for day work in France, Dani started her career in yachting and has almost eight years of experience working on the interior of yachts. While she takes her job seriously, she lets her feelings get the best of her and leaves her questioning how to best chart the course ahead.

Alli boards Parsifal III as a divemaster with boating experience on the exterior and hoping to round out her resume with more experience on the interior. She is a bubbly, eccentric Australian with a big heart and unique perspective that guides her to emotionally, unexpected places.

No stranger to life on the water, Sydney's parents lived on a sailboat when she was born and she now helps run her family's boat business, where they charter a 76-ft schooner named Freedom. She takes pride in her knowledge of traditional sailing but being new to the super yachting world poses personal challenges as she gets caught in the undertow of a controversial boatmance.

As the youngest crew member and dubbing himself "the tallest deckhand in yachting," at almost seven feet tall, Jean-Luc spends most of the charter season trying to prove to the elder crew members he's on their level in many ways.

NEW YORK - December 18, 2019 - Bravo sets sail on the newest iteration of the highly rated and acclaimed original franchise with "Below Deck Sailing Yacht" premiering Monday, February 3 at 9pm ET/PT. Trading in the motor yacht famed on "Below Deck," this series is set on a luxury sailing yacht with a new crew and equally demanding charter guests looking to follow the wind as they cruise along the crystal-clear blue waters of Corfu, Greece. Chef Adam Glick from "Below Deck Mediterranean" returns to the galley aboard the180-foot-long sailing yacht Parsifal III.

"Below Deck," currently in its seventh season and airing on Monday nights at 9pm ET/PT, is pacing to deliver its best season ever among P25-54 with 1.5 million viewers and 2.5 million total viewers. The second installment of the franchise, "Below Deck Mediterranean" has posted the largest P18-49 ratings growth of any television series that's been airing for the last four years, and is one of only three series across all of television with three consecutive years of P18-49 growth.

On "Below Deck Sailing Yacht," Parsifal's existing crew Captain Glenn Shephard and yachtie couple Paget Berry and Ciara Duggan, are joined for the charter season by Chef Adam, Jenna MacGillivray, Byron Hissey, Madison Stalker, Georgia Grobler and Parker McCown. When the sails are up, the crew's already difficult job gets tougher as they must contend with maneuvering the sails in high winds and adapting to the steep tilt of the boat, all while troubleshooting the needs of the guests and any issues that may arise. Constantly at the whim of the wind, it's a sailing lover's paradise and getting there is part of the fun as they visit the colossal cliffs, explore the breathtaking sites and the beaches in the sun-drenched Ionian Sea.

The physicality of working on a sailing yacht brings new challenges to these young, attractive and adventurous yachties who are ready to work hard and play harder. Below deck, tensions between the crew are amplified by the conditions of working aboard a sailing yacht which has a sleeker design than their motor yacht counterparts, with a smaller galley, almost non-existent stew stations and cramped living quarters. And while two yachties start a roller coaster romance so intense that it might sink the yacht, resident couple Paget and Ciara's existing relationship gets pushed to new boundaries.