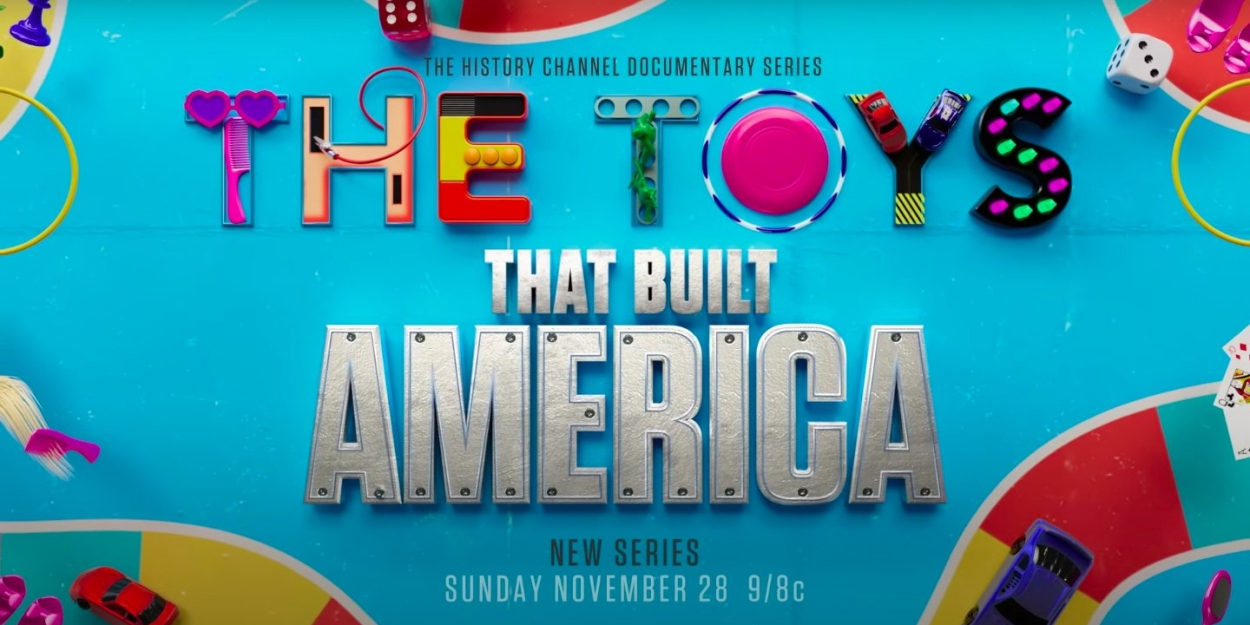 THE HISTORY(R) CHANNEL TO UNBOX THE HISTORY BEHIND SOME OF AMERICA'S MOST BELOVED TOYS AND THE BRILLIANT VISIONARIES WHO BROUGHT THEM TO LIFE IN NEW FOUR-PART DOCUSERIES "THE TOYS THAT BUILT AMERICA" PREMIERING SUNDAY, NOVEMBER 28 AT 9PM ET/PT

NEW YORK, NY - November 5, 2021 - The HISTORY(R) Channel unboxes the next installment of its popular "That Built" franchise with the new four-part docuseries "The Toys That Built America" premiering Sunday, November 28 at 9PM ET/PT. "The Toys That Built America" chronicles the toy titans whose imaginations soared to build billion-dollar empires, the rivalries that gave rise to the modern toy industry and the history of the visionaries behind iconic products like Monopoly(R) and G.I. Joe(R). Additionally, through its "Mission To Honor" award-winning public outreach campaign, the network is partnering with Blue Star Families as an extension of its longstanding commitment to giving back to those who served and are serving in the military with a donation of toys and educational items during the holiday season.

Against the backdrop of major events in American history like the Civil War, the Great Depression and World War II, "The Toys that Built America" shares a story that brings nostalgic toys to the forefront as driving forces behind untold cultural and economic shifts. The four-part docuseries explores visionaries such as the Parker Brothers, Milton Bradley and Ruth Handler who transformed a small toy company into the billion-dollar empire known as Mattel(R). It reveals little-known details behind groundbreaking innovations like the Frisbee(R), and accidental discoveries like how the Slinky(R) was created. Additionally, the docuseries unveils competitive rivalries between iconic brands that changed the fabric of our nation forever. Blending dramatic reenactments and archival footage with interviews from experts, biographers, and others, each episode brings to life the surprising tales of the men and women who created some of America's most beloved and enduring toys including Silly Putty(R), Barbie(R), Hot Wheels(R), Matchbox Cars(R), and other famous classics.

"Toys teach us to imagine, have fun and, most importantly, dream big," said Eli Lehrer, Executive Vice President and Head of Programming for The HISTORY(R) Channel. "In 'The Toys That Built America,' we learn the fascinating history behind the inventors of some of the greatest and most ingenious toys of all time - many of which shaped our childhoods. As toys continue to encourage a new generation to dream bigger, we are proud to continue our commitment to honor and support military families by partnering with Blue Star Families to thank and give back to those who have sacrificed to serve our country."

The HISTORY(R) Channel has an ongoing commitment to mobilizing support for veterans and military families through the award-winning "Mission To Honor" public outreach campaign. The initiative acknowledges the vital contributions of servicemen and women by sharing their stories as well as collaborates with the nation's leading veterans' organizations to bring awareness to military families who give back to their communities through service.

In partnership with Blue Star Families, The HISTORY(R) Channel is showering veteran and military families with toys and educational items during a "Mission To Honor" philanthropic event on Monday, November 22 at the B&O Railroad Museum, the birthplace of American railroading, in Baltimore, MD. The CSX 1776 Pride in Service locomotive and holiday helpers are delivering these gifts in style to military families in attendance. The network is also pledging to donate $1 for every post on social media, up to $25,000, to Blue Star Families by encouraging viewers to share a photo, video or nostalgic memory of their favorite childhood toy using #ToysThatBuiltAmerica and tagging @HISTORY.

Awareness of the "Mission To Honor" initiative is being driven through promotion across the network's linear, social media and digital platforms. The generous toy and educational supply donations are made possible by the following brands: deuter, Basic Fun!, Educational Insights, Radio Flyer, Silly Bandz, Funko and the Sydney Paige Foundation. The Sydney Paige Foundation is a non-profit based in California dedicated to providing children in underserved communities with equal access to the tools and confidence needed to learn and thrive in school and in life. To date, Sydney Paige has supplied over 1,000,000 brand new, high quality backpacks and school supplies to students K-12. Blue Star Families founder and CEO Kathy Roth-Douquet: "After coming off a highly successful Welcome Week last month where we created a moment of welcome for those 600,000 military members who move each year, we are continuing to WELCOME military families into their communities through exciting events such as this!"

The November 28 premiere episode of "The Toys That Built America" presents the history behind several iconic and creative novelty toys like Silly Putty(R), Slinky(R) and Frisbee(R) with the surprising details behind their inception, inspiration and continued relevance. Did you know the idea for Frisbee(R) started in 1957 when former Air Force pilot Fred Morrison and his girlfriend were tossing his mother's pie pan on the beach? Viewers will hear other surprising facts behind these toys and their creators including Richard and Betty James, Peter Hodgson, Richard Knerr and Arthur Spud Melin. A nostalgic ride through the decades, additional episodes explore inventors Milton Bradley, the Parker Brothers, Jack Odell, Merrill Hassenfeld, Ruth and Elliot Handler and more.