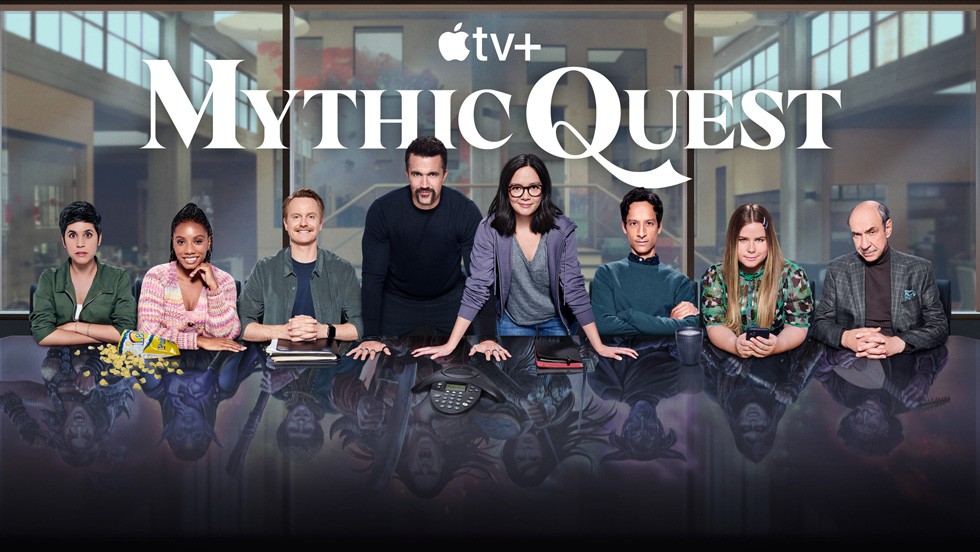 Apple TV+ today announced a season three and four pick-up of "Mythic Quest," the hit sitcom from creators Rob McElhenney, Charlie Day and Megan Ganz, which has been hailed by critics as "hilarious and endearing," "a ton of fun," and "the best workplace comedy on TV." McElhenney, who also stars, shared the news in his signature comedic style with a video featuring fellow Apple TV+ star and Emmy Award-winner Jason Sudeikis ("Ted Lasso"), and Academy Award-winner Sir Anthony Hopkins, who recently earned a Primetime Emmy Award nomination for Outstanding Narrator for his guest star role in the "Mythic Quest" special, "Everlight." Boasting a 100% Certified Fresh score on Rotten Tomatoes, the series is set to open the writers' room for season three later this year.

"Just like critics and audiences all over the world, we fell in love with Rob and his team's sharp writing and full-of-heart, relatable characters that make up the world of 'Mythic Quest,'" said Matt Cherniss, head of programming for Apple TV+. "We can't wait for viewers to see what's in store in the upcoming seasons of this brilliant workplace comedy."

With the quarantine finally over, the new season of "Mythic Quest” finds everyone back in the office (well, almost everyone), attempting to build upon the success of Raven's Banquet by launching an epic new expansion, but Ian (Rob McElhenney) and the newly promoted co-creative director, Poppy (Charlotte Nicdao), struggle with the game’s direction. Meanwhile, C.W. (F. Murray Abraham) reconciles some unresolved issues from his past, the testers (Ashly Burch and Imani Hakim) test the bounds of an office romance, and David (David Hornsby) loses yet another woman in his life as Jo (Jessie Ennis) leaves him to assist Brad (Danny Pudi).

Apple today announced that the highly anticipated comedy series, “Mythic Quest: Raven’s Banquet” from Rob McElhenney and Charlie Day (“It's Always Sunny in Philadelphia”) will debut globally on Friday, February 7, exclusively on Apple TV+. All nine, half-hour episodes of the live-action comedy, co-created by McElhenney and Megan Ganz, will be available on Apple TV+ the day of premiere. The series is produced by Lionsgate, 3 Arts Entertainment and Ubisoft.