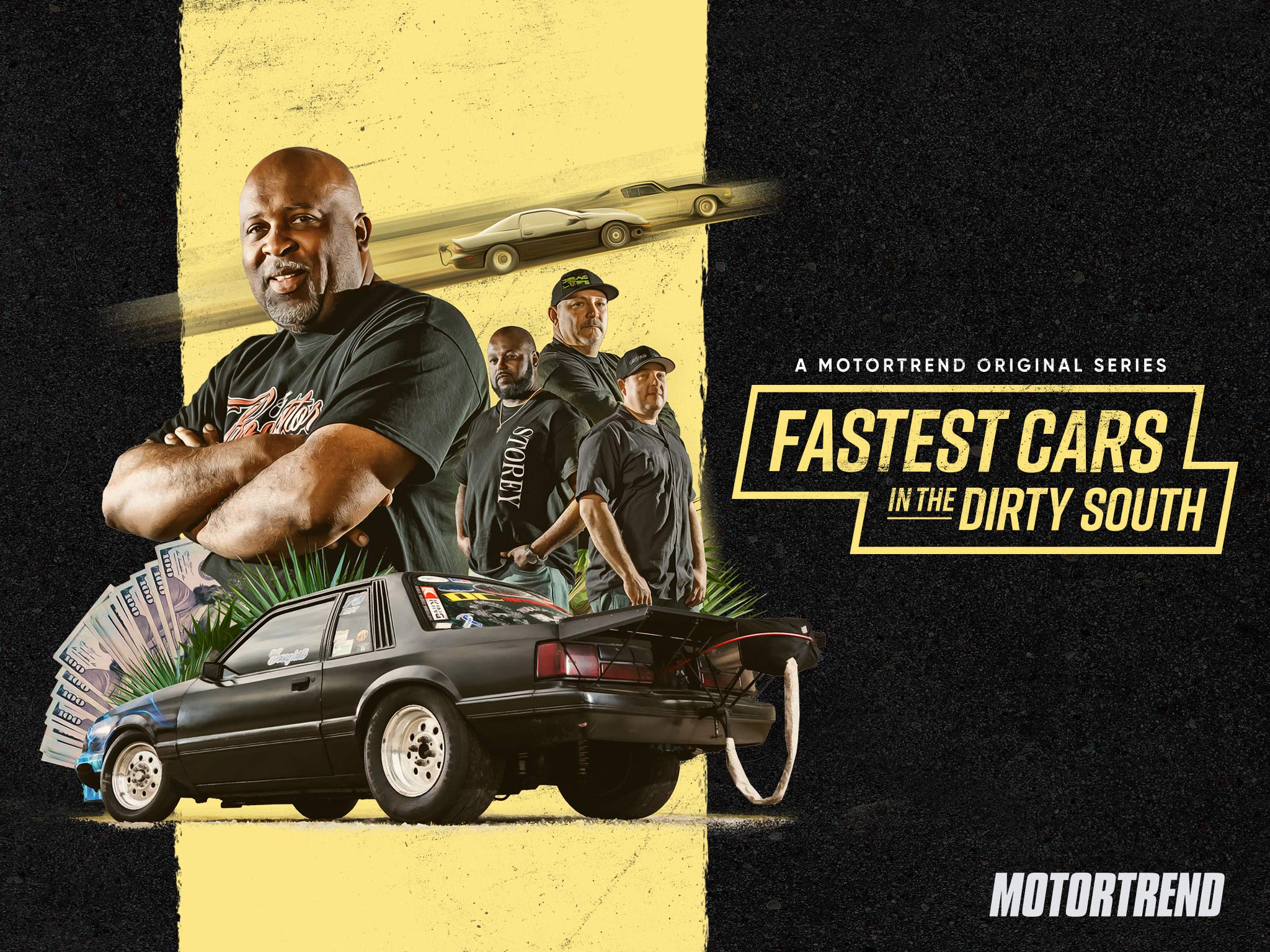 Grudge racing is a high stakes, competitive world where fabricators and mechanics push cars to the limit so drivers can speed down closed tracks at 140 miles per hour in hot pursuit of bragging rights and cold hard cash. Down in Muscle Shoals, Ala., Eric Malone and Team 256 dominate the fringe sport as the team all other competitors want to take down. In the all-new season of the hit series FASTEST CARS IN THE DIRTY SOUTH, produced by Flying Scoop Media & Entertainment, MotorTrend+ transports viewers inside this hard charging, high stakes sport following Malone and Team 256 as they race across the southern United States.

This season, premiering Friday, January 28, 2022, on MotorTrend+, FASTEST CARS IN THE DIRTY SOUTH picks up in the first episode, "Build Back Better", after a grueling racing season last year left Team 256 fragmented with little hope for repair. In the race against the Memphis 10, Malcolm Storey stepped up to lead the team to victory after a fight broke out and members of the 256 left the track including Malone. A power struggle within the team followed suit, causing Malone's former partner Brant Arnold to literally set his contract ablaze. Malone now works to pull the team together again by reconciling with certain teammates while letting others walk. Meanwhile, Storey is forming strategic alliances with rival race teams across the south in a bid to overthrow Malone and Team 256 and take the keys to the FASTEST CARS IN THE DIRTY SOUTH.

Upcoming Episodes of FASTEST CARS IN THE DIRTY SOUTH:

Malone puts his team to the test to restore a speedy Chevrolet S10 to its former glory as king of the track at Holly Springs in Mississippi. To claim victory they need to dominate the current crown holder, Jeff Hunt, a nemesis with a fast Mustang that was also built by Team 256 two years ago. Meanwhile, Storey preps his famous Lil' Duke car for "no prep" grudge racing with help from the Memphis 10 and thickens his plot against Team 256.

Things get all torqued up when Dayne Hearn tells Team 256 about Storey's new grudge racing team, and Storey is working on wrangling Brant Arnold away from his custom Big Rig trucking business to join his grudge force to go head-to-head against Malone. How will Malone maintain control over the grudge community to power through his new opposition?

As Storey pieces together a new team, a former opponent seeks help on a big wager. Is this a chance to make a splash on the Dirty South racing scene and prove they can be a challenge to Team 256? Or will this Monte Carlo SS bury the fledgling grudge team?

Team 256 is on a winning streak and dominating the Dirty South. Storey and his team full of 256 outcasts are looking for any opportunity to corner Malone into the ultimate grudge battle. With nowhere to hide, Malone looks to his brother for a rescue mission and Storey puts a new team member to the test at one of his biggest grudge festivals.

On the verge of an epic grudge battle for control over the Dirty South racing kingdom, Storey and team struggle to get their cars ready: Arnold's motor is down, Crystal Newman's car has a fender bender, and Dayne Hearn is questioning his commitment to the new team. Can Storey pull this new unnamed team together to even make it to race day against Team 256?

Today is the first battle in a war for control over the Dirty South. Storey has pulled together a force that just might be able to match the strength of Team 256, but with Hearn's motor down and Storey's "Lil' Duke" fighting gremlins the newly named Team Outkasts could be in for a slaughter. The victor of this grudge race will be the team that plays the best game of chess to outmaneuver their opponent.

Notoriety for Team 256 is spreading across America. Now, Dodge is challenging Malone to a grudge shootout on Woodward Avenue in Detroit. He'll go up against social media superstars to see who can build the fastest Hellcat with a stock drivetrain and $10,000 for upgrades. Meanwhile, Storey and his Outcasts are looking for their own way to prove their strength and break out of the south when they get called out by Jay Payso, a grudge maven who claims he and his team are the fastest cars in Motor City. Will Team Outcasts finally come together as a formidable force, or will this race be the final nail in the coffin?

Eric Malone is a master mechanic with a deep passion for racing. If he's not roaring down a track, then he's buried beneath a car's hood tuning getting the best out of an engine. Early on Malone gained a passion for rebuilding engines and racing. His talent for fixing broken motors at the track gained him a job with renowned Alabama drag racer Kenny Ford, the owner of Muscles Shoals' Performance Torque Converters (PTC). While working for Kenny, Eric paved the way for legal street racing on closed tracks and built a reputation for having one of the fastest cars in the south. Today the best race car builders and grudge racers around Muscle Shoals compete to be on Malone's Team 256.

Team 256 is a fast, fearsome group of drivers, fabricators, and top mechanics. They race so fast that teams from across the region avoid them whenever possible out of fear of losing. Malone has changed the grudge racing game to attract worthy competitors. Now he takes the slowest car from another team, upgrades it and then races their opponents with their very own cars. Viewers of FASTEST CARS IN THE DIRTY SOUTH get an inside look at every step of Team 256's grudge racing process - from the high-stakes betting and negotiations to car customizations and the intensity and speed of race day.

(Los Angeles) - MotorTrend Group, a Discovery company, announced today the season two greenlight of the hit MotorTrend TV series FASTEST CARS IN THE DIRTY SOUTH which takes viewers inside the unique world of grudge racing throughout the southern United States. Season one premiered to great fanfare, quickly becoming MotorTrend TV's #2 series for Men 18-34, #4 series for P/M 25-54 and a top 10 series overall. The new season of FASTEST CARS IN THE DIRTY SOUTH is scheduled to premiere in 1Q2021.

"We want to bring fans the full variety of car culture that exists across the U.S.," said Mike Suggett, head of programming and development, MotorTrend Group. "Our viewers are intrigued by the often unseen and unheard-of southern grudge racing scene, as well as the competitive, talented people who work hard to advance their passion. We're really looking forward to what's in store for the sophomore season of FASTEST CARS IN THE DIRTY SOUTH."

FASTEST CARS IN THE DIRTY SOUTH follows Eric Malone and his expert team as they compete in races where daredevil drivers top 140 miles per hour on closed tracks. Malone's Team 256 is a fast, impressive group of drivers, fabricators and mechanics who've won so much they've had to change the grudge racing game to attract worthy opponents. Routinely, Team 256 takes the slowest car from an opposing team, upgrades it with limited time and a limited budget, and then races the opposing team in their transformed vehicle. Viewers of the series see every step of the team's grudge racing process - from the on track high-stakes betting and negotiations to car customizations and the intensity and speed of race day.

Every episode of season one of FASTEST CARS IN THE DIRTY SOUTH is streaming now on the MotorTrend App, the only subscription streaming service dedicated entirely to the motoring world.