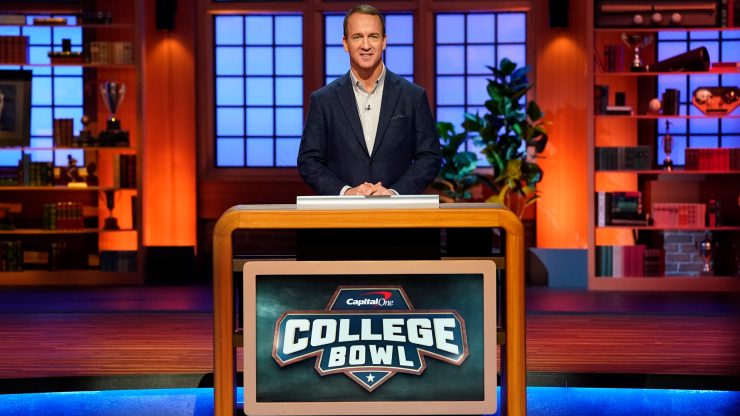 NBCUniversal Partners with Capital One to Award $1 Million In College Tuition
UNIVERSAL CITY, Calif. - Apr. 12, 2021 - NBC is set to reignite some of the nation's greatest college and university rivalries in the ultimate battle of brains in the new summer series "Capital One College Bowl," premiering on Tuesday, June 22 at 10 p.m. ET/PT. Hosted by Peyton Manning, with his brother Cooper Manning serving as sidekick, the series challenges college students out of the classroom and puts their knowledge to the test as they compete for academic scholarships.

From Universal Television Alternative Studio, a division of Universal Studio Group, and Village Roadshow Television, the series is a reboot of the classic Emmy and Peabody Award-winning "College Bowl" that previously aired on NBC in the U.S., and for decades has been part of campus life at colleges and universities around the world.

In partnership with Capital One, all competitors will receive tuition assistance for participating in the series, but members from the winning team will take home an even bigger scholarship in addition to becoming the "Capital One College Bowl" champions. Capital One is providing a total of $1 million in scholarships to participants, including special recognition for the series' Capital One Merit Award recipients. The Capital One Merit Award will be given to four students who have made an impact outside of the competition in recognition of their proven character, leadership abilities, and involvement in extracurricular activities that benefit the community. Capital One serves as an integral partner for the series ensuring no student will go home empty-handed.

Manning has personally endowed 45 scholarships to the University of Tennessee, helping to support deserving students at his alma mater every year since 1998. His PeyBack Foundation has established 10 scholarships across eight different Historically Black Colleges and Universities (HBCUs).

Cooper, the oldest of the three Manning brothers, has earned national recognition for his humor and wit as host of "The Manning Hour" on "FOX NFL Sunday."

Capital One has made a commitment of $1 million in combined grants for the Thurgood Marshall College Fund and The United Negro College Fund to support HBCUs and create pathways to greater opportunity for the graduates of these vital institutions. In addition, through Capital One Cup, which recognizes excellence in collegiate athletics, Capital One has donated more than $4 million to student-athlete scholarship funds, half of which have gone to support women's athletics programs.

The College Bowl Company, creator of the original College Bowl, currently produces other decades-long academic competitions, including University Challenge for BBC2 in the UK and Honda Campus All-Star Challenge for America's Historically Black Colleges and Universities.